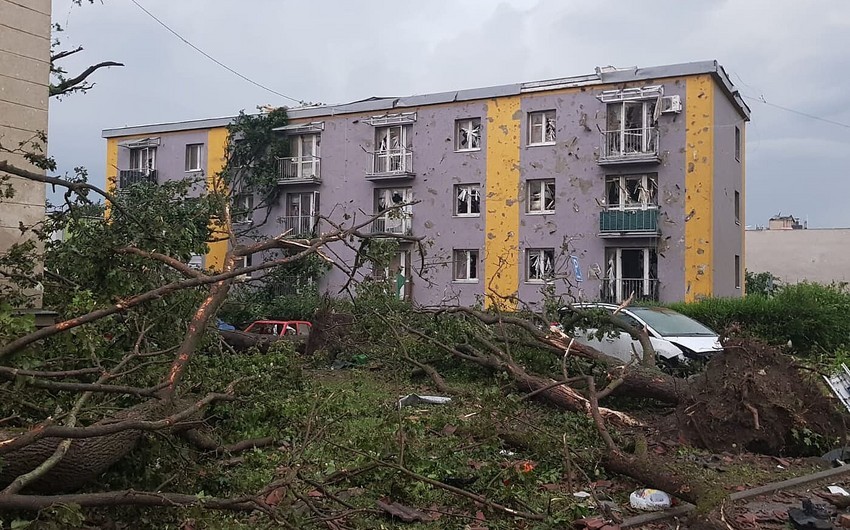 A huge tornado has swept through parts of Germany and left 50 people injured with vicious winds ripping roofs off houses and smashing cars, according to local reports.

Report informs, citing The western town of Lippstadt has reportedly been wrecked by strong winds reaching a whopping 80mph and police in North Rhine-Westphalia have reported ten serious injuries.

Photos show hailstones several centimeters wide and schools in Cologne were forced to shut their doors at midday to allow kids to rush home safely before the storm.

A 37-year-old woman was reportedly airlifted to hospital after she was badly hurt in the storm.

German officials warned of life-threatening conditions and the Berlin Environmental Senate told people to stay away from green spaces and forests because of falling trees.

Railway travel has been severely disrupted and St. Clemens Catholic Church’s steeple in Hellinghausen has been torn off and strewn around the ground, reports German news site DW.

Videos circulating online show cars with smashed windows and a fire engine that has been completely battered by the freak winds.

In another, a man can be seen sheltering in his car as huge chunks of debris fly around him and hail hammers into his car roof.

The weather was so destructive that over 40,000 fans at a gig were forced to stop listening to German band Rammstein at the Leipzig concert and instead take cover.