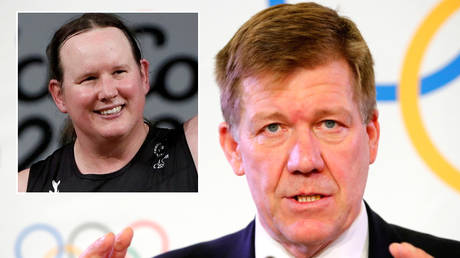 The IOC’s medical top dog has admitted that science has moved on but claimed that the threat to women’s sport posed by transgender athletes has been “overstated”, speaking before a controversial weightlifter features at the Games.

Dr Richard Budgett, the International Olympic Committee’s (IOC) medical and science director, has overseen rules based on guidelines from 2015 that have allowed transitioned athletes to compete when their testosterone is below a specified level for 12 months.

Hubbard, the controversial New Zealander who is competing in the women’s competition at super-heavyweight, takes medication to lower her testosterone below the set level.

There has been considerable recent debate over whether those guidelines are backed by science, and Budgett now appears to have acknowledged arguments that they should be revised, saying that he “absolutely accepts” that “things move on.”

“At the time, the 10 nanomoles per liter was set because we thought that was the lower level for men,” said Budgett. “We know now that they go down to seven and women can be higher as well.

“Agreeing on another number is almost impossible and possibly irrelevant. You can debate that endlessly.”

Budgett nodded to issues around fairness that have been routinely raised, including in attempts to introduce legislation in US states preventing transgender athletes from competing with athletes born as women.

IOCs medical and science director Dr Richard Budgett – “Everyone agrees that trans women are women”No, everyone doesn’t agree with a mantra that has no place in sports and decisions based on science. An opinion like this makes objective fairness impossible at the Olympics.

Medicine and science don’t even agree with this, let alone “everyone”. pic.twitter.com/ro8c5K4gSm

“There is some research but it depends on whether you are coming from the view of inclusion as the first priority or absolute fairness to the nth degree being the priority,” suggested Budgett.

“If you don’t want to take any risks at all that anyone might have an advantage, then you just stop everybody. If you are prepared to extrapolate from the evidence there is, and consider the fact the have been no openly transgender women at the top level until now, I think the threat to women’s sport has probably been overstated.

A medical practitioner said what???? pic.twitter.com/4ytTFYwjuD

“The other important thing to remember is that trans women are women. You have got to include all women if you possibly can.”

Olympic hopeful Hubbard, whose historic campaign begins on Monday, has received a mixed response to her career path and participation.

The athlete has received high-profile backing from figures including New Zealand prime minister Jacinda Ardern, while others – including medical experts and insiders at sporting institutions – have criticized her involvement in the spectacle.

People are so scared of being labeled transphobic, they are afraid to speak.

Budgett’s clearly not living in the same world as the majority of us. Show us the money – that’s what’s driving Budgett’s belief, no doubt.

“I see the Olympic Games as a global celebration of our hopes, ideals and values,” Hubbard said in a statement read out at an IOC briefing on inclusion.

“I would like to thank the IOC for its commitment to making sport inclusive and accessible.”

The 43-year-old competed as a man before transitioning in 2013, and has qualified for the Olympics under rules set by the International Weightlifting Federation.

In some ways this might be a good thing as it will raise the issue on a global scale. Lots of people unaware of this madness will get an introduction and I think trans ideology will come under greater scrutiny than ever before. It doesn’t stand up well under scrutiny.

Budgett’s clearly not living in the same world as the majority of us. Show us the money – that’s what’s driving Budgett’s belief, no doubt.

The requirements could change as part of a new review of scientific data led by the IOC, with new guidance potentially being released within two months.

“Science will help, experience will help and time will help,” said Budgett, who appeared to back World Rugby’s decision to ban trans athletes at elite level because of concerns over safety.

In some ways this might be a good thing as it will raise the issue on a global scale. Lots of people unaware of this madness will get an introduction and I think trans ideology will come under greater scrutiny than ever before. It doesn’t stand up well under scrutiny.

It will be fascinating to hear the views of the presenters, commentators and pundits on Monday. There will be no hiding place: they can’t pretend this isn’t happening.

“It may be the right thing to do in many sports, because it is at the most elite level in their case that they are concerned about safety.

“As you come down from that level, you can start to prioritize inclusion more than safety. You can understand it. I think there is a legal element to this as well – they have really prioritized safety.” (RT)