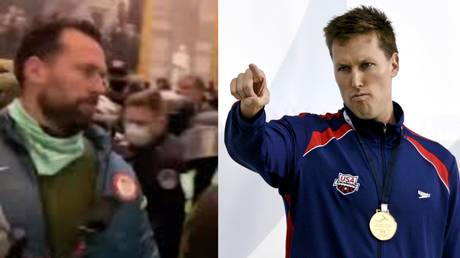 Klete Keller (R) is shown with a gold medal at the Pan Pacific Swimming Championships in 2006 and purportedly in a screenshot (L) from the Capitol riot. © Reuters / Jason Reed

Former Olympic swimmer Klete Keller has apologized for taking part in the US Capitol riot, but leftists are still demanding the unprecedented step of taking away his medals because of his alleged crimes.

“He apologized to me,” former US national team coach Mark Schubert told the New York Times. “He kept repeating, ‘You’ve done so much for me, and I let you down.’ He kept saying over and over, ‘I didn’t mean for any of this to happen.'”

The 38-year-old Keller, who stands six feet, six inches tall, was seen on social media footage inside the Capitol Rotunda wearing a Team USA jacket. He turned himself in to federal authorities on Thursday, one day after being charged with knowingly entering a restricted building and with two misdemeanors.

News of the charges prompted President Donald Trump haters, such as former MSNBC host Keith Olbermann, to call on US Olympic officials to demand that the International Olympic Committee (IOC) take back Keller’s three gold and two bronze medals. The three-time Olympian’s tearful apology apparently did little to soften those reactions.

“He’s only sorry because he was caught,” one observer said Tuesday on Twitter. “I agree with those calling for him to be stripped of his Olympic medals.”

He’s only sorry because he was caught. I agree with those calling for him to be stripped of his Olympic medals.‘I Let You Down’: Klete Keller’s Path From Olympics to Capitol Riot https://t.co/h47svvYWke

Another commenter said Keller was “part of the MAGA terrorist attack and attempted coup” and therefore must be stripped of his medals. “He meant what he did,” she said. “No white-privilege excuses. Fired, prosecuted, convicted, imprisoned.” One observer suggested that Keller should also lose the collegiate medals he won when he was a champion swimmer at the University of Southern California.

@USASwimmingOlympic gold medalist swimmer #KleteKeller was part of the MAGA terrorist attack & attempted coup. @Olympics must strip him of his medals. He meant what he did. No white privilege excuses.FIRED. PROSECUTED. CONVICTED. IMPRISONED.#NoFlyList#TrumpDomesticTerroristspic.twitter.com/G9UcPIQHHL

i hope the @Olympics, the @NCAA, and @pac12 have stripped or are gonna strip #KleteKeller of any medals/records/championships he won

The comments were typical of the tone seen from Democrats in the wake of the January 6 riot, which bubbled up from an election-fraud protest. Leftists have called for such penalties as revoking the college degrees of GOP members of Congress who disputed President-elect Joe Biden’s victory and blacklisting members of President Trump’s administration from getting jobs, book deals or speaking engagements. (RT)