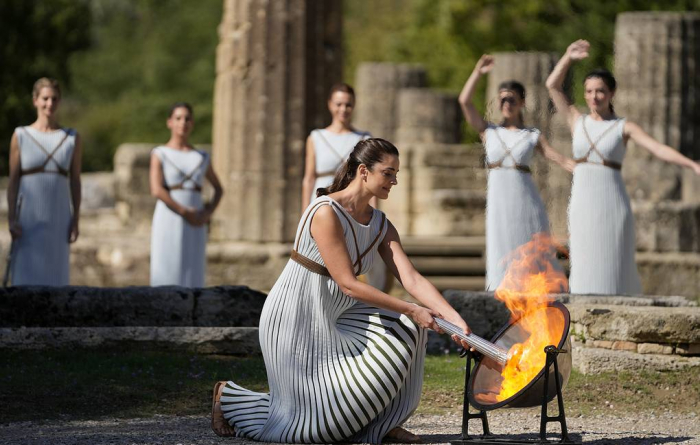 The Olympic flame of the 2022 Winter Olympic Games in China’s Beijing was lit on Monday during a solemn ceremony in Ancient Olympia, according to TASS.

Greek actress Xanthi Georgiou, dressed as an ancient Greek High Priestess, lit the flame in front of the Temple of Hera using a parabolic mirror and sun rays.

This year the ceremony was held without spectators in attendance, just like before the 2020 Summer Olympic Games in Tokyo, as a preventive measure against the spread of the novel coronavirus.

The first leg of the Olympic torch relay was ran by Greek alpine skier Ioannis Antonio, who was also one of the torch bearers for the 2014 Olympics in Russia’s Sochi and was a flag bearer of his national team at the 2018 Olympics in South Korea’s PyeongChang.

Due to the pandemic restrictions, only three legs of the torch relay were scheduled to be run today before the flame was delivered to the Panathenaic Stadium in Athens. The flame will be handed over on Tuesday to the Beijing 2022 Organizing Committee delegation.

The ritual of lighting the Olympic flame dates back to the ancient Olympic Games in Greece. It is a reminder of the legend of titan Prometheus, who stole fire from the Gods and gave it to human beings as a gift. The modern tradition was revived in 1928, at the Amsterdam Olympics, when the Olympic flame was for the first time lit at the main stadium. And in 1936, before the Olympic Games in Berlin, a torch relay was held for the first time in modern history.

The 2022 Winter Olympic Games in the Chinese capital of Beijing are scheduled to be held between February 4 and 20.

Beijing won the right to host the 2022 Olympics and Paralympics in a tight race, beating Kazakhstan’s Almaty in 2015, by chalking up 44 votes against its rival’s 40.