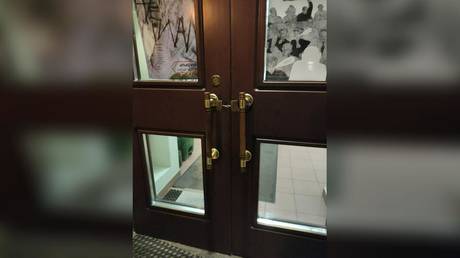 A photograph purporting to show a pair of handcuffs barring a door at the offices of Memorial, a registered foreign agent, in Moscow. © Twitter / @hrc_memorial

Staff of the Memorial Human Rights group in Moscow were reportedly locked inside their offices for hours after the screening of a film about Ukraine’s Soviet-era famine was disrupted by masked protesters forcing their way inside.

On Thursday evening, around 30 men wearing face coverings disrupted the showing of ‘Mr. Jones’ by Polish Director Agnieszka Holland. They are said to have shouted that the show was over and accused those in attendance of being fascists.

A video of the event posted on Twitter by the Paris-based arm of the organization, Memorial France, shows the men standing in front of the screen, yelling and pointing at the audience watching the film. Police then arrived at the scene and apparently handcuffed the doors to the entrance, shutting the group’s staff inside for hours. (RT)

Launching a full-blown invasion of Ukraine is still on the cards for Moscow, Kiev’s foreign…