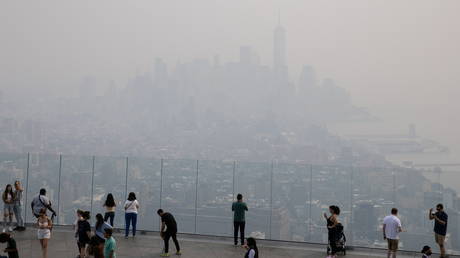 Smoke from the deadly West Coast wildfires has grown so massive it can be seen – and breathed – as far away as New York City, where the air quality was measured as the worst in over 14 years.

Air quality in New York was measured as the worst worldwide on Tuesday – on par with Kolkata, India – owing to the raging wildfires on the West Coast, with state officials advising those with respiratory issues like asthma to avoid strenuous activity outdoors.

New York issued an air quality alert after smoke from fires in the U.S. West traveled 3,000 miles.Scientists say smoke usually thins out over long journeys, but in recent years it is staying thick because of so many large fires (over 80).”There’s just so much smoke.” pic.twitter.com/qMZbEtS1Gt

Normally I can see One World Trade and The Empire State Building from my apartment in Brooklyn. Today that’s not possible pic.twitter.com/KxIqaK7y1j

Despite the fires burning some 2,500 miles away, New Yorkers couldn’t help but see the effects, including an eerie orange tinge to the moon and a pervasive haze that left some Manhattan residents unable to even see across the Hudson River to New Jersey.

Oregon’s Bootleg Fire continues to grow, now burning an area half the size of Rhode Island.The fire is so big it’s creating its own weather.Smoke from the 80+ wildfires in the U.S. West are creating smoggy conditions and prompting health concerns as far away as New York City. pic.twitter.com/TdxH1075pt

With more than 80 major wildfires burning in 13 states, most in the West, the city’s famous skyline has been enveloped in haze for the past two days, with similar effects visible from as far away as Philadelphia, Washington, DC, and Toronto.

The air quality index hit 157 in the city – far above the safe limit of 100 and the worst recorded anywhere on Wednesday – reportedly extending into the 160s that morning. (RT)