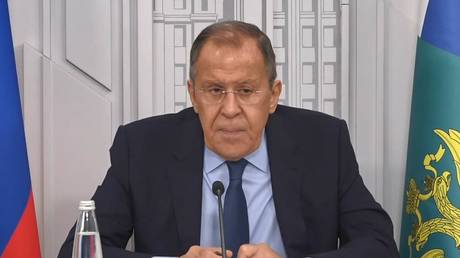 The topics were among those focused on during the Russian foreign minister’s latest engagement with journalists Russian Foreign Minister Sergey Lavrov gives a press conference on European security issues in Moscow, December 1, 2022. © Ruptly

The US is pursuing geostrategic goals without regard for the risk of nuclear escalation amid the ongoing Ukraine conflict, Russian Foreign Minister Sergey Lavrov said on Thursday during a press conference. Moscow is nonetheless ready for dialogue with Washington or any other party that wishes to engage, he added.

Lavrov also explained Russia’s choice of strike targets in Ukraine, and touched on recent comments by the Pope, which Moscow has branded as an “insinuation.”

Here’s a recap of the main points from Lavrov’s video-link press conference.

Peace talks ‘lies’ People are lying when they claim that Russia is offering to negotiate with Ukraine in bad faith and is only interested in buying time for its military to regroup, the foreign minister stated.

“We never asked for any negotiations. But we always stated that if somebody has an interest in a negotiated settlement, we are ready to listen,” he said, pointing to talks in Istanbul in late March as an example.

He accused the US of pushing Kiev towards continued military confrontation and derailing the peace process. Washington is seeking to weaken Russia and profit from arms sales, he claimed.

US subjugation of European security Moscow doesn’t need “the kind of security” architecture that Western countries are trying to build without Russia and Belarus, Lavrov said. “European security now boils down to being fully submissive to the US,” he added.

Just a few years ago, France and Germany sought independence from American military protection, Lavrov recalled. But the US is determined to make NATO indispensable, and wants to pit European nations against Russia, he claimed. If they choose to change this direction, Moscow would be willing to discuss better alternatives, the foreign minister said.

Strike targets in Ukraine and US, NATO role in the conflict Western nations should not claim that they’re not participants in the Ukraine war, considering everything they’ve done for Kiev, Lavrov said, as he explained the Russian military’s choice of strike targets in the country.

Read more:   Enrollees choosing UNEC will be able to get two diplomas in 4 years

“We are taking out infrastructure objects, which allow you to pump lethal weapons into Ukraine so that they could kill Russians. So don’t say that the US and NATO are not part of this war. You are participating in it directly,” he insisted.

In addition to sending arms, NATO members are training Ukrainian troops both on their soil and on the ground, the minister added. There is also “a large number of mercenaries” and sharing of intelligence, while “an overwhelming number of targets” attacked by Kiev “are picked by Western masters of this regime,” he stated.

Risks of nuclear war Russia believes that any armed conflict between nuclear states should be avoided and urges other states adopt the same stance, Lavrov said.

“Even if somebody plans to start a war with conventional weapons, the risk of it sliding into a nuclear war would be immense,” he explained. He added that this made Western claims that Russia could use weapons of mass destruction in Ukraine particularly concerning.

‘Unchristian’ remarks from Vatican Lavrov criticized Pope Francis for making a controversial statement about Buryats and Chechens, two of the many ethnic groups in Russia. A number of these serve in the Russian Armed Forces, taking part in the special military operation in Ukraine.

The pontiff’s claim that they were particularly prone to brutality on the battlefield was, Lavrov said, “strange” and “unchristian,” and “certainly didn’t help the cause [of peace in Ukraine] and the reputation of the Holy See.”

Open doors for talks Moscow will not reject any contact with any party that seeks to engage, but does not expect fruitful talks to happen with Western nations at the moment, Lavrov said.

“Anyone asking for a phone conversation gets one, the president speaks to them with no time constraints. But we don’t hear any meaningful ideas,” he said.

The West’s policy of not discussing “Ukraine without Ukraine” is “at least naive” and obviously flawed, Lavrov added, since ignoring the Ukraine conflict when discussing global stability is impossible. After all, the US has declared the defeat of Russia, a major player in global security, as its goal in Ukraine, he remarked. (RT)