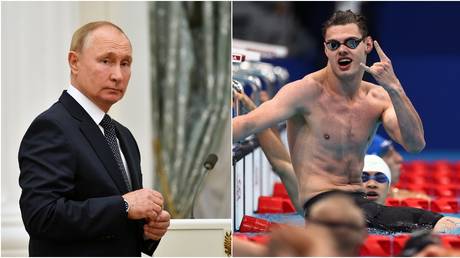 Vladimir Putin has had to turn down a signature request from a Paralympian. © Reuters / Action Images.

Russian President Vladimir Putin has refused an unusual request from a double gold medal-winning champion at the recent Tokyo 2020 Paralympic games, after the compatriot athlete asked him to sign his passport.

Swimmer Andrei Nikolaev – who was victorious in the 4x100m medley and men’s 400m freestyle, while bagging silver in the men’s 100m freestyle – reportedly asked Putin to sign the official document as the leader met members of the Russian Paralympic Committee team.

The team finished fourth in the official medal standings in Tokyo with 36 gold, 33 silver and 49 bronze for a total of 118 medals behind China, Great Britain and the United States.

And while this is something to be proud of, Putin had to turn down the unorthodox request.

We never get tired of seeing these celebrations! 😍Andrei Nikolaev wins his first Paralympic medal 🤟#ParaSwimming#Tokyo2020#Paralympicspic.twitter.com/GZ9UU1t5aW

“Not in the passport, the passport’s a document, you’ll ruin it!” Putin said, as the 20-year-old noted that if he had accepted, there would be two passports in Russia signed by the president.

Not long after after the ceremony, Putin went into isolation after a member of his entourage tested positive for Covid.

“Isolation will not affect his work,” Peskov added, “but there will be no face-to-face events for some time.” (RT)