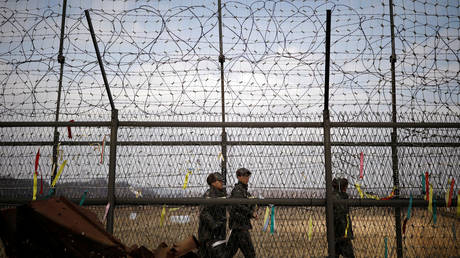 A North Korean man, reportedly a former gymnast, has defected to the South by apparently vaulting over a three-meter wire fence at the heavily guarded border.

The unnamed man, said to be in his 20s, managed to avoid detection by North Korean troops and jump over the wire fence without triggering sensor alarms.

According to local media, the fence looked pressed down but “didn’t appear to have been modified or cut.”

He crossed into South Korea through the Demilitarized Zone (DMZ) at around 7pm local time on November 3, before being captured 14 hours later by South Korean soldiers less than a mile from the border.

The defector was taken to custody and is reportedly seeking political asylum in South Korea.

A NORTH KOREAN gymnast has sensationally vaulted over a 12ft barbed wire fence to reach freedom in the south according to reports#SouthKorea#Defector#Gymnasthttps://t.co/AS89G0QHsq

Seoul officials who are investigating the incident are said to have made the man recreate his insane jump twice to make sure he could have leapt across the border.

The man’s light body weight and gymnastics training apparently helped him to make the gravity-defying vault in a daring bid to escape. (RT)