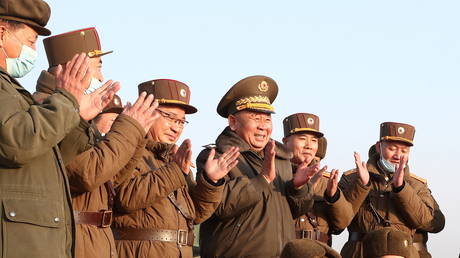 Ri Pyong Chol, the senior leader who is overseeing the test, and other military officials applaud after the launch of a newly developed new-type tactical guided projectile on March 25, 2021© KCNA/Reuters

Responding to American criticism of its recent missile launch, North Korea has accused Washington of denying its right to self-defense, even as the US holds war games at the country’s doorstep and tests advanced weaponry.

“It’s a gangster-like logic that it is allowable for the US to ship the strategic nuclear assets into the Korean peninsula and launch ICBMs any time it wants but not allowable for the DPRK, its belligerent party, to conduct even a test of a tactical weapon,” senior North Korean official Ri Pyong Chol said in statement on Saturday.

The comments came after US President Joe Biden condemned a series of missile launches by Pyongyang, which test-fired several newly developed “tactical guided missiles” on Thursday, with the US leader vowing to “respond accordingly” if North Korea opted to “escalate.”

Also on rt.com Pyongyang says it fired NEW tactical guided missile as it ramps up testing with flurry of launches

Defending the launches, Ri argued that the guided missile test was merely an “exercise of the full-fledged right of a sovereign state to self-defense,” given that the US and its allies routinely flex their military muscles in the region with “dangerous war exercises” and are happy to arm themselves with advanced weapons.

Ri appeared to reject speculation that the rocket launches, all conducted within a span of a week in the run-up to Biden’s much-anticipated first solo press conference on Thursday, were meant to send a signal to the new administration. (RT)

17:26 Chief of Army Staff of Pakistan Army to visit Azerbaijan