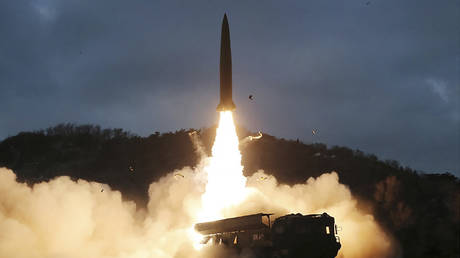 The missiles may have flown on “irregular” trajectories, Japan has said FILE PHOTO: A missile test in North Korea, January 2022. © AFP / KCNA / KNS.

According to the South Korean Joint Chiefs of Staff (JCS), the projectiles were fired from near Pyongyang, traveling around 350 kilometers (217.5 miles) towards the Sea of Japan, which Koreans call the East Sea.

Japanese Vice Defense Minister Toshiro Ino said that the missiles may have flown on “irregular” trajectories, as quoted by Kyodo News.

“The recent series of North Korea’s ballistic missiles is an act of significant provocation that undermines peace not only on the Korean Peninsula, but also in the international community,” the JCS said in a statement to the media, adding that the launch is illegal under international law. 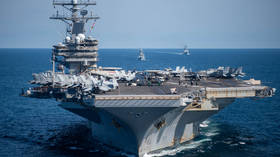 US to lead major naval drill

The US Indo-Pacific Command released a statement, saying that the launch “highlights the destabilizing impact of the DPRK’s unlawful WMD and ballistic missile programs.”

In a speech on Saturday, South Korean President Yoon Suk-yeol warned that the North “will face the resolute and overwhelming response of the South Korea-US alliance and our military” if it attempts to use nuclear weapons.

The launch comes one day after the US, South Korea, and Japan conducted a joint anti-submarine drill for the first time since 2017. The exercise involved the US nuclear-powered aircraft carrier USS Ronald Reagan, which arrived at South Korea’s port of Busan last week. Pyongyang has stated in the past that it considers such drills to be a threat to national security.

US Vice President Kamala Harris visited Tokyo and Seoul this week, reaffirming Washington’s commitment to the alliance with Japan and South Korea. (RT)