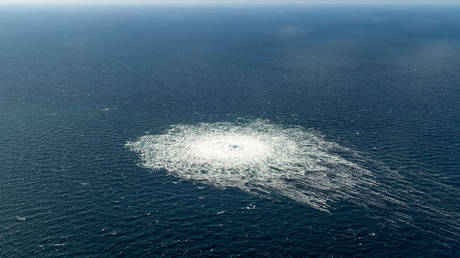 The gas leak at the Nord Stream 2 gas pipeline seen from the Danish Defence's F-16 rejection response off the island of Bornholm, ©  AFP PHOTO / DANISH DEFENCE

The pipelines were damaged by explosions, each with a force equivalent to 500 kg (1,100 pounds) of TNT, the WSJ reported The gas leak at the Nord Stream 2 gas pipeline seen from the Danish Defence’s F-16 rejection response off the island of Bornholm, © AFP PHOTO / DANISH DEFENCE

The Nord Stream 1 and 2 pipeline leaks were caused by two powerful explosions, each with a force equivalent to 500 kg (1,100 pounds) of TNT, the Wall Street Journal reported on Thursday citing sources. Danish officials reportedly revealed the details at a NATO meeting on Wednesday.

In a statement published on Thursday, the North Atlantic Council, NATO’s decision-making body, did not assign blame for the leaks on any actor and only claimed that the pipelines were damaged in what appeared to be a “deliberate, reckless, and irresponsible acts of sabotage.”

However, officials in some member countries “have already attributed the destruction to Russia, without providing evidence,” the report says.

The paper reported that during the Council meeting, member countries said Russia was ‘likely’ behind the Nord Stream ruptures. But apparently most of them did not want to publicly voice their speculations without “more evidence,” according to unnamed senior European diplomats cited by the outlet.

The diplomats noted that “there was little serious doubt” in capitals that Moscow orchestrated the Nord Stream leaks, but they wanted to be absolutely certain about it, given the implications such accusations may entail.

Moscow has repeatedly dismissed allegations that it had something to do with the sabotage. Kremlin spokesman, Dmitry Peskov described the incident as a probable “terrorist act” which is unlikely to have been possible “without the involvement of some state power.”

On Thursday, Maria Zakharova, Russian Foreign Ministry spokeswoman, offered a reminder that this summer NATO was engaged in military activities close to the location where the leaks were found, hinting that it might have presented an interesting “opportunity” for the bloc.

Earlier, Sky News reported, citing a UK defense source, that the Nord Stream pipelines may have been sabotaged by a remotely detonated underwater explosive device, which could have been planted months or even years prior to the incident.

On Monday, Denmark reported leaks from the pipelines, which connect Germany and Russia under the Baltic Sea, after the operator reported a loss of pressure on both Nord Stream 1 and 2. Danish and Swedish authorities later said there had been a series of undersea explosions near the island of Bornholm. In total, there have been four gas leaks detected in the Nord Stream system. (RT)