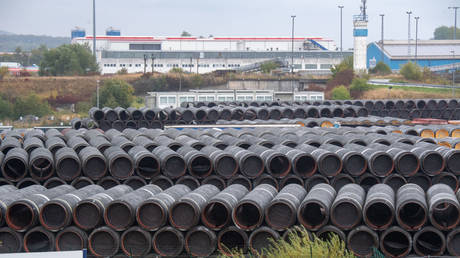 Unused pipes for the Nord Stream 2 gas pipeline are stored on the site of the Port of Mukran, September 27, 2022, Lubmin, Germany. © Getty Images / Stefan Sauer/picture alliance

The process would be time-consuming and costly, according to Russia’s deputy PM Unused pipes for the Nord Stream 2 gas pipeline are stored on the site of the Port of Mukran, September 27, 2022, Lubmin, Germany. © Getty Images / Stefan Sauer/picture alliance

Russia may be able to fix the Nord Stream 1 and 2 pipelines, which were damaged earlier this week, Deputy Prime Minister Aleksandr Novak said on Sunday.

“There are technical possibilities to restore the infrastructure, it requires time and appropriate funds. I am sure that appropriate opportunities will be found,” Novak told Russia 1 TV.

According to the official, however, the first step should be to determine who is behind the incident.

“As of today, we proceed from the fact that it is necessary, first of all, to figure out who did it, and we are sure that certain countries, which had expressed their positions before, were interested in it. Both the US and Ukraine, as well as Poland at one time said that this infrastructure is not going to work, that they will do everything to make sure of it, so, of course, it is necessary to seriously look into it,” Novak stated.

Read more:   Direct flights to be commenced between Azerbaijan and Pakistan

Citing German security services, Der Tagesspiegel newspaper earlier reported that the damaged routes could be permanently out of use if they are not repaired quickly, as salt water could cause corrosion.

The Danish authorities reported leaks on both the Nord Stream 1 and 2 pipelines on Monday after a local pipeline operator noted a loss of pressure following a series of undersea explosions in the area. The Danish Energy Agency reported earlier on Sunday that the pressure on the Nord Stream 1 is stable and the gas leakage is over, while on Saturday, it said the Nord Stream 2 also stopped leaking gas.

The incident is widely considered to be the result of sabotage. Russia has called it a terrorist attack. While those behind it have not yet been identified, Moscow has blamed the US.