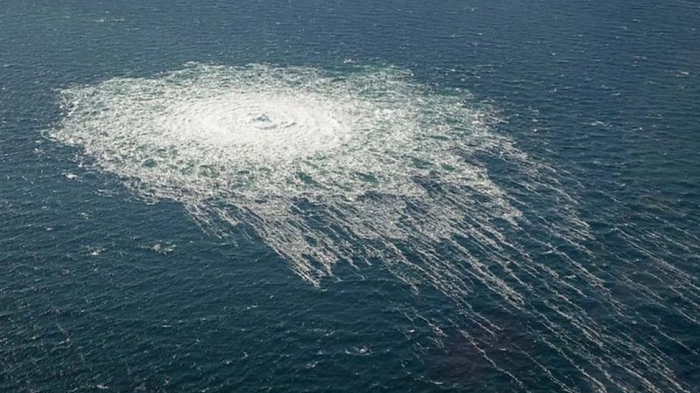 The EU has said leaks in two major gas pipelines from Russia to Europe were caused by sabotage – but stopped short of directly accusing Russia.

The EU has previously accused Russia of using gas supplies as a weapon against the West over its support for Ukraine.

The US Secretary of State Antony Blinken said he thought the leaks would “not have a significant impact on Europe’s energy resilience”. Neither pipeline is transporting gas at the moment, although they both contain gas.

Mr Blinken did not directly accuse Russia – but said it would be in “no-one’s interest” if they were caused deliberately.

The Danish Energy Minister, Dan Jorgensen, said the leaks were likely to last for at least a week, until the gas escaping from the pipes runs out. An investigation has been launched.

The operators of Nord Stream 2 warned of a loss of pressure in the pipeline on Monday afternoon. That led to Danish authorities saying ships should avoid the area near the island of Bornholm.

Then on Tuesday, the operator of Nord Stream 1 said the undersea lines had simultaneously sustained “unprecedented” damage in one day.

The Nord Stream 1 pipeline – which consists of two parallel branches – has not transported any gas since August when Russia closed it down, saying it needed maintenance.

It stretches 745 miles (1,200km) under the Baltic Sea from the Russian coast near St Petersburg to north-eastern Germany. Its twin pipeline, Nord Stream 2, was halted after Russia invaded Ukraine in February.

Mike Fulwood, a senior research fellow at the independent Oxford Institute for Energy Studies told the BBC sabotage was, indeed, the most likely cause of the leaks.

“To rupture an offshore pipeline is a rare occurrence, so three in 18 hours would be a big coincidence,” he said.

If the sabotage was indeed committed by Russia, this was a “bizarre” move, he said, as it had already shut supplies off.

He estimated that repairs could take between three and six months, as the damaged sections would need to be replaced. Similar damage to a different pipeline in the past took nine months.

Dmitry Peskov said he was “extremely concerned” about the leaks, adding that the possibility of a deliberate attack could not be ruled out.

Seismologists reported underwater blasts before the leaks emerged. Denmark’s Defence Command has released footage of the leaks which shows bubbles – the largest is 1km (0.6 miles) in diameter – at the surface of the Baltic Sea.

“There is no doubt that these were explosions,” said Bjorn Lund of Sweden’s National Seismology Centre.

Greenpeace raised concerns over the leaks, saying they could have the same detrimental impact on the environment as 30 million tonnes of carbon dioxide.

But the German environment ministry said the leaks would not pose a significant threat to marine life.