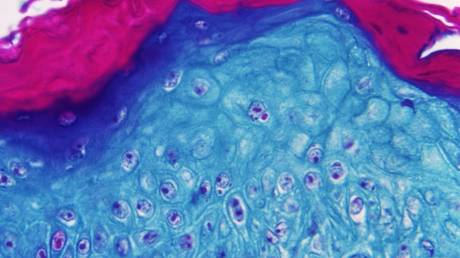 Magnified image of skin tissue, harvested from a lesion on the skin of a monkey, infected with monkeypox virus. Courtesy CDC © Getty Images / Smith Collection/Gado / Contributor

Meanwhile, the total number of cases in the UK alone has reached 106 Magnified image of skin tissue, harvested from a lesion on the skin of a monkey, infected with monkeypox virus. Courtesy CDC © Getty Images / Smith Collection/Gado / Contributor

There is no need for mass vaccination against monkeypox but contact tracing and isolation remain essential to contain the outbreak, Rosamund Lewis, the head of the World Health Organization’s smallpox department, said on Friday.

During a briefing in Geneva, Lewis said that, according to the latest advice from WHO, only people who professionally deal with viruses – i.e. lab personnel, health workers, and first responders – might need to be considered for extra protection. Smallpox countermeasures, including vaccines, are believed to be effective against monkeypox.

The WHO expert stressed that it was “critically important” to take the isolation of contacts very seriously.

Meanwhile, the UK Health Security Agency (UKHSA) said on Friday that, within the last 24 hours, 16 new cases of monkeypox have been identified, bringing the total number of UK cases to 106. This makes Britain the country with the highest number of cases in Europe. (RT)