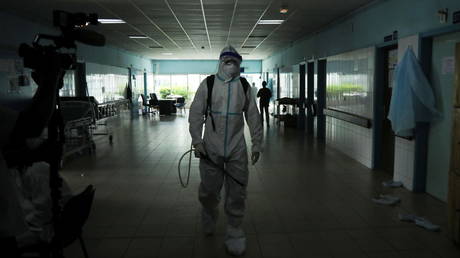 A health worker prepares to disinfect a hallway of a hospital amid Ebola scare in Abidjan, Ivory Coast on August 16, 2021. © Reuters / Luc Gnago

The first Ebola case reported by Ivory Coast in over 25 years turned out to be a false alarm, the WHO said, as “no evidence” indicated the patient actually suffered from the disease, declared “cured” by local health authorities.

The World Health Organization (WHO) has re-examined samples collected from the suspected Ebola patient detected by the West African country back in August.

“The suspected case was a young woman who traveled from Guinea to Cote d’Ivoire. Since Cote d’Ivoire announced the case more than 140 contacts have been listed in the two countries. No one else has shown symptoms for the disease or tested positive for Ebola,” the UN health watchdog said in a statement. (RT)