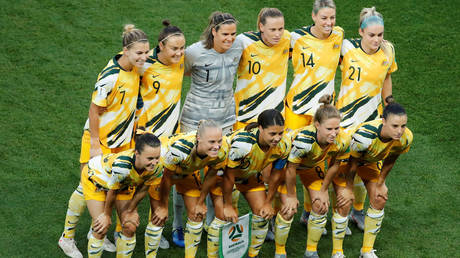 Australia legend Elise Kellond-Knight joined dumbfounded fans in voicing their astonishment after the new national women’s team kit was only produced in men’s sizes, leading to calls for Nike and the governing body to apologize.

After unveiling the popular new look for the national team’s new replica away design alongside the men’s kit, the official account of the Matildas was forced to inform disappointed players and fans that the kit would not be available in female sizes and the issue would not be corrected until 2022.

Stars from the team had joined their male counterparts to show off the new shirts and highlight their eco-friendly new design, which is made with entirely recycled polyester from plastic bottles as part of a Nike sustainability campaign.

An accompanying Nike advert, endorsed with the national team’s logo, grandiosely proclaimed: “You can’t stop us.

Unfortunately, the new national teams away kit will not be available in women’s sizes. We apologise for any inconvenience caused and can assure supporters that this will be rectified for the next kit release due in 2022.

“When we move forward as one, there are no limits. We are the future of football.”

Any goodwill that created quickly evaporated among Matildas supporters when the team’s official social media platforms hurriedly announced that the change strips would not be tailored for women, leaving 113-cap stalwart Kellond-Knight lamenting a “significant problem”.

Others were less restrained. “Why even advertise the away kit if we can’t buy it in women’s sizes ever?” asked one.

“You’ve taken this huge step back after just winning the hosting rights to the 2023 World Cup. It’s quite honestly shameful.”

One outraged supporter asked several of the team’s stars, including captain and Chelsea forward Sam Kerr, for their feelings on the revelation that “female fans can’t support you.”

Ummmmm 🙈, this is a fairly significant problem @nikefootballhttps://t.co/L7I44JoBLC

2022? Is this a joke? How many years does it take to fix this? 😹 pic.twitter.com/atfMxYcDqX

Wow…that is just EMBARRASING! I know that we want both sexes following the Matildas, but surely we want enough stock for WOMEN who want to support the WOMENS National Team!!Did a male organise this??

“Imagine if that happened to the men’s national side,” suggested an angry respondent after discovering the debacle.

“I can’t for the life of me understand how this situation occurred other than a cost-saving measure. Embarrassing for all concerned.”

Female teams were usually required to play in the same style of shirts as their male counterparts until last summer’s 2019 World Cup, when Nike proudly launched the first bespoke women’s kits for the teams it was partnered with at a ceremony in Paris fronted by leading athletes and models.

Nike’s Cassie Looker, who singled out Australia’s kit at the time and claimed the sportswear giant aimed to give women “the inspiration and innovation they need” through kit design, said the shirts were an “emotional” reflection of the dedication female players gave to the game.

“It was a totally different fit brief in terms of the data that we have,” she told the Guardian, adding that “too short is too revealing”.

That seems… An appalling oversight.If the reason is not that men were in charge of agreeing to which sizes to organise, & simply forgot about (or failed to even think about) women’s sizing, then what is the reason?If that is the reason that man/men should be fired.

Come on, get some women’s & girls sizes for your away kit!! Inc us women please Welcome to #equalityinfootballpic.twitter.com/U6u80QjYes

waiting a full two years is totally unacceptable for a mistake that shouldn’t have happened to begin with. whoever at ffa who’s in a position to fix this needs to get onto it now, not two whole years jeez

“That was our starting point but then there were other bits of information like making a jersey easy to take on and off over your hair and ponytail; that women don’t like a deep V, they prefer crew, so making sure the neckline is the right fit; a sleeve that’s not too short.”

Little more than a year later, some social media users have demanded answers over what they perceive as a fiasco.

“I am speechless that this could happen in 2020,” complained one.

“Women supporting women athletes – how does a decision like this even get made?”

A spokesperson for Football Federation Australia, which struck a historic deal with the Matildas to put them on the same pay scale as the men last year and offer them commensurate perks such as business air travel, told ABC News they had no immediate comment to add. (RT)