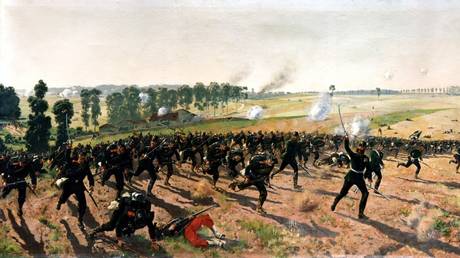 © ‘The Rifle Battalion 9 from Lauenburg at Gravelotte’, a painting by Ernst Zimmer (1910).

A new poll found that the French are divided on whether a war can break out among EU members, while over half of them believe that the bloc may collapse in two decades or less. RT asked people in Paris what they think.

The data was released earlier this week by the European Council on Foreign Relations (ECFR), a pro-EU think tank.

The survey, conducted in 14 member states, found that the support for the European Union is “record high,” but the majority of people fear that the bloc may collapse in one or two decades. Some 58 percent of polled Frenchmen called the grim scenario “realistic,” as did the majority of Italians and Germans.

Talking the ‘worst case’ scenario, 34 percent of Frenchmen revealed that a war between EU member states can indeed happen, while 32 percent said it won’t happen. The people RT spoke to on the streets of Paris were also divided on what the future may hold.

Also on rt.com ‘Let down by establishment’: Voters’ anger may lead to dramatic change in European Parliament

Some dismissed the notion of an inter-EU armed conflict outright. “It’s like a nightmare: That will never happen,” one man insisted. Others felt that Europeans have learned from past mistakes and will try to find ways of resolving disagreements peacefully, despite having “differences in [our] cultures.”

Others expressed the opposite view, saying that the prospect of an armed conflict remains “something that could happen in the future.”

“In 20 years, lots of things could happen and there could be a war,” one person in Paris told RT.

“We could see a repeat of the First or the Second World Wars… we never know.”

Even when not thinking about catastrophic events such as warfare, some locals find the current state of affairs worrisome. “We are a little bit scared but I hope this will not end with more consequences like Brexit or so,” a man said.