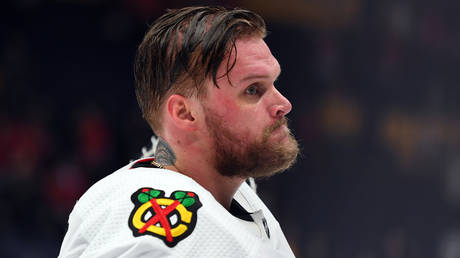 Vegas Golden Nights goaltender Robin Lehner has pulled out of Sweden’s ice hockey team ahead of February’s Winter Olympics in Beijing, saying that concerns over a Covid lockdown are “not ideal” for his mental health.

Longtime NHL stalwart Lehner, 30, announced his decision to skip the event on Twitter, something he says was a tough decision and that he was passing up a “once in a lifetime opportunity” but admitted that his concerns and uncertainties about China’s strict Covid-19 protocols were weighing heavily on his mind.

China is currently operating under a so-called ‘Zero Covid’ policy and has instituted comprehensive safety guidelines ahead of the Games. Events will take place without foreign spectators, while athletes will be required to stay within a ‘closed loop’ and will be subject to mandatory daily testing for Covid-19.

Unvaccinated athletes will be required to enter a period of self-isolation for 21 days after their arrival in the country.

Great performance tonight from our team. Have to address I will not go to the olympics. I’m very disappointed and it tough decision for me as it’s once in life time opportunity. Reality is that what have been said about how it’s going to be is not ideal for my mental health.

Took long time to make decision with my psychiatrist and family. My well being have too come first and being locked down and not knowing what happens if you test positive is to much of a risk for me. Sweden will have a great team and Markström is a beast.Hope people understand ❤️

Amid concerns as to what might happen if he tests positive while in Beijing, Lehner says that he was little with little choice but to withdraw from selection.

“Have to address I will not go to the Olympics,” he wrote on Twitter. “I’m very disappointed and it is a tough decision for me as it’s a once-in-a-lifetime-opportunity.

“The reality is that what has been said about how it’s going to be is not ideal for my mental health.

“I took a long time to make decision with my psychiatrist and family. My wellbeing has to come first and being locked down and not knowing what happens if you test positive is too much of a risk for me.

“Sweden will have a great team and Markstrom is a beast. Hope people understand.”

Really respect @RobinLehner for not only speaking out about things in the NHL he has seen that are wrong but also about the importance of mental health & breaking that stigma, continuing to do so and to also do what is best for HIM & his family & not giving into the culture.

Once in a lifetime opportunities aren’t worth the biggest picture in your life… your health. It’s fantastic to be able to recognize that. Best wishes, Robin.

Lehner is a well-known mental advocate of mental health and has been open about his previous struggles with bipolar disorder.

He had been expected to compete for a place in the Swedish side with compatriot Jacob Markstrom after the retirement of previous starter, two-time Olympic medallist Henrik Lundqvist.

Sweden have twice won gold in 1994 and 2006 and were eliminated at the quarter final stage in Pyeongchang in 2018.

Lehner has been one of the NHL’s leading voices on mental health welfare, criticizing the playoff ‘bubble’ that the league created in 2020.

He was also critical of the league’s restrictions on vaccinated players last season, saying that mental health needed to be made “important as well in this situation.” (RT)