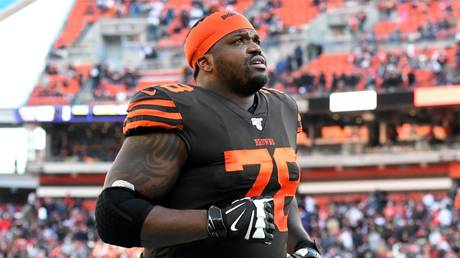 Ex-Cleveland Browns offensive tackle Greg Robinson has been charged with intent to distribute marijuana and further related charges after being arrested near the USA-Mexico border with significant quantities of the drug.

Robinson, a former number two pick in the NFL Draft, spent the last season as a member of the Cleveland Browns but had been advised by the team in recent days that they would be declining the opportunity to re-sign him, and it looks like he is currently very far from a football field after being apprehended at a border patrol checkpoint.

However, it is understood that Robinson was not transporting the drugs into or from Mexico.

Robinson was arrested along with former collegiate teammate and ex-Indianapolis Colts wide receiver Quan Bray, along with a third person who is said to be uninvolved in the alleged crime.

The United States Attorney’s Office from the Western District of Texas announced in a statement that officers had discovered “approximately 157 pounds of marijuana inside several large duffle bags in the rear cargo area” of a rented car in which both men were traveling.

Robinson allegedly offered the third man in the car, who is understood to be an Uber driver, quantities of money to assume responsibility for the marijuana in the car. He told police he wouldn’t have got in the car had he known what it was carrying.

Per a report by TMZ, police also discovered 23 mason jars, an electronic scale, $3,100 in cash and a can-sealing machine.

Federal authorities filed a criminal complaint against the two players on Wednesday, with a hearing set for Friday. (RT)

08:52 Close to 70 percent of Vanuatu’s Luganville destroyed by Cyclone Harold