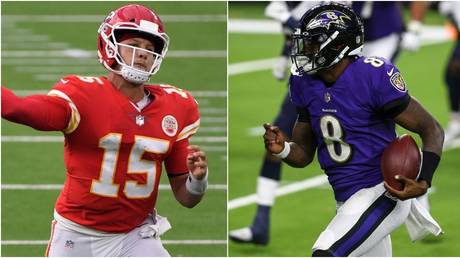 The two most recent NFL MVPs, Patrick Mahomes and Lamar Jackson, are set for a titanic primetime showdown on Monday night in the opening exchanges of a rivalry which promises to define the league for a decade or more

Hindsight, they say, is 20/20 but few could have predicted just how well both Patrick Mahomes and Lamar Jackson could have adapted to the big show when they were drafted into the league in 2017 and 2018 respectively.

In fact, many an eyebrow was raised when the Kansas City Chiefs moved up in the 2017 NFL Draft to secure the services of Texas Tech QB Mahomes in the 2017 draft. After all, Andy Reid’s team already had three-time Pro Bowler Alex Smith in their ranks, a signal-caller with a reputation for solid consistency – if not exactly possessing the type of ‘X Factor’ for which Mahomes has subsequently been known.

The same could be said of the Baltimore Ravens’ decision to draft Jackson a year later, with the Louisville star selected with the final pick in the 2018 first round – and after the supposed cream of the crop QBs Baker Mayfield, Josh Allen, Sam Darnold and Josh Rosen all coming off the board several picks beforehand.

Of that 2018 crop of quarterback rookies, Mayfield and Allen have impressed more than they haven’t. Darnold is struggling in a very poor New York Jets team and, well, the less said about Josh Rosen the better.

Read more:   Shooting NATO with its own bullet? What we know about Kalashnikov's new rifle, chambered in alliance-standard 7.62x51mm

And if the respective selections of Mahomes and Jackson appeared risky at the time, both have paid off spectacularly.

By the age of 24, Mahomes had already become the youngest quarterback to ever win the MVP award – only to surrender that honor to the 22-year-old Jackson late last year. In 2018, he became only the second QB ever to throw 50 touchdown passes and for 5,000 yards in a single season (Peyton Manning also did this in 2013).

The following year, Jackson became the first player in NFL history to rush for more than 1,000 yards while also throwing 30 or more touchdown passes. Their career records also signify potential greatness, with Mahomes (26-7) and Jackson (21-3) owning a collective win percentage of .825 – the highest combined percentage entering a game of any two quarterbacks in the history of the league.

Mahomes’ achievements have been recognized by his team, with the Chiefs tying him up to a mammoth ten-year, $503 million contract – the largest ever such deal in American professional sports.

But what is so unique about the Mahomes/Jackson rivalry, and where it differs from previous matchups between the likes of Tom Brady, Peyton Manning, Brett Favre and Drew Brees, is the sheer contrast of their play.

Mahomes possesses one of the finest touches seen by a quarterback in a generation. This, coupled with an innate ability to read his opponents’ defence and his frankly ludicrous arm strength, means that opposing teams often have to deploy their secondary defence deep to guard against Mahomes pinpoint accuracy, affording him more space for short passes to the likes of Tyreek Hill or Travis Kelce to take advantage of.

Jackson, while having a better than good arm, doesn’t quite have Mahomes’ accuracy but he does own incredible speed and is adept at reading running lanes – as evidenced by his 1,200 yards and seven touchdown season on the ground last year.

“These two are the future,” retired safety Eric Weddle, who has played against both Mahomes and Jackson, told ESPN.

“You are not a smart individual if you didn’t put some money on these two having some amazing games over the next six to 10 years. It’s going to be Brady-Manning all over again.”

If indeed Patrick Mahomes vs. Lamar Jackson becomes the new Brady vs. Manning, they will have some big boots to fill. Brady and Manning combined eight Super Bowl wins and eight NFL MVP awards throughout their careers, with their games against one another becoming the focal point of the sport for the best part of a decade.

What’s more, the development of both Mahomes and Jackson illustrates the transition that the NFL has undergone in recent years. While Brady and Manning were surgical in their precision under center, Mahomes and Jackson are very much the new generation of NFL player – whether it be Mahomes’ incredible ‘no look’ passes, or Jackson’s innate ability to chew up yardage.

“I’m going against a great talent like him – a guy who can throw the ball anywhere he wants on the field and make things happen each and every game. It’s very exciting.”

And much like how Brady and Manning drove each other towards greatness, the same is expected of Mahomes and Jackson as they meet on the field for the third time ever in Baltimore on Monday night – and the first time they’ll meet in front of a nationally televised audience.

“The whole world is watching you,” Jackson said of the upcoming encounter. “It’s just time to put on a show.”

And just like some of the other dominant sporting rivalries like Lionel Messi vs. Cristiano Ronaldo and Muhammad Ali vs. Joe Frazier, neither man will be willing to cede an inch to the other. (RT)