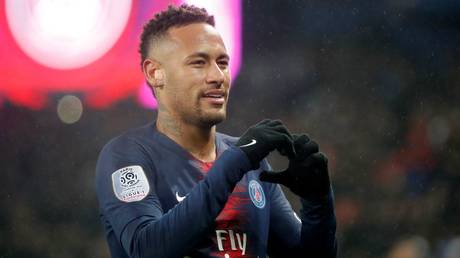 Neymar is discussing a new deal worth more than $40 million a year to stay at Paris Saint-Germain, according to reports in France, suggesting the Brazil striker could reverse his decision to quit the Ligue 1 giants.

The 27-year-old was booed by his own fans at the Parc des Princes after missing the first five matches of PSG’s season in an apparent attempt to engineer a move to Barcelona, who he has been continuously linked with a return to this season.

His world-record move from the Camp Nou to Paris for €222 million (US$245 million) in 2017 symbolized the French champions’ ambition to win the Champions League, and the surprise thawing of his relationship with the club could lead to a new contract should PSG seriously challenge for Europe’s top trophy this year.

A contract extension on an increased wage is now more likely than a move to Barca according to Foot Mercato, which reports that discussions have opened between Neymar and PSG.

The Parisians were knocked out of the Champions League by a last-gasp Marcus Rashford penalty for Manchester United at the Round of 16 stage last season, and Neymar will be more likely to leave should PSG exit the competition when they face Borussia Dortmund at the same stage this term.

Also on rt.com ‘It could be PSG’s year’: Neymar eyes Champions League glory this season as he reflects on ‘very difficult year’ in 2019

The report suggests PSG’s initial offer to Neymar, who has scored nine goals in his last eight matches, was made at the start of January.

Former forward Alejandro Moreno told ESPN that Neymar staying at PSG would require a complete reverse from club and player.

“Now you’ve shifted gears and are apparently going in a whole different direction. I’m not quite sure where PSG are trying to get to.”

PSG were also knocked out of the Champions League at the first knockout stage during Neymar’s first season at the club, losing to Real Madrid following his arrival on an existing deal that runs until 2022.

Currently eight points clear at the top of Ligue 1, they travel to Dortmund for the first leg on February 18. (RT)

Tropical Storm Beta has appeared in the Atlantic Ocean, Report says, citing TASS. According to…

Guatemalan President Alejandro Giammattei has been diagnosed with COVID-19, Report informs, referring to TASS. “We…

Trump and experts fire back and forth on testing, vaccines