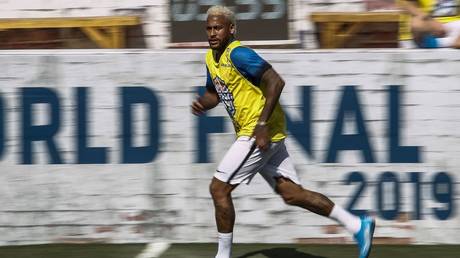 Brazilian forward Neymar belatedly returned for pre-season training at Paris Saint-Germain on Monday but speculation continues to mount as to how long he will remain at the Ligue 1 champions.

Neymar was due back in France one week ago but failed to show, prompting the club to issue an official statement condemning the actions of the man who joined them in a world-record deal from Barcelona two seasons ago.

The Brazil star instead remained at home in Rio de Janeiro, first watching his international teammates lift the Copa America in his absence as he sat on the sidelines nursing the ankle injury he picked up ahead of the tournament.

He was then seen taking part in an event for his Instituto Neymar charity – during which he infuriated PSG fans even more by giving an interview in which he named his famous 2017 comeback victory with Barcelona against his current club as among his favorite football moments.

Neymar: “My best memory as a footballer? When we won against PSG with FC Barcelona”

But the wantaway star finally returned to Paris on Monday, and was seen training at the club’s Camp des Loges base in the morning.

He is expected to hold crunch talks with senior club figures in the near future, after expressing his clear desire to quit Paris after two seasons, with his preference said to be a return to Barcelona.