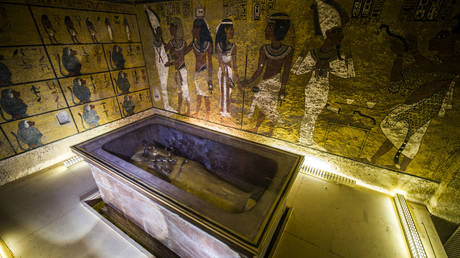 Archaeologists working in Egypt’s Valley of the Kings have made the bombshell claim that they may have discovered the secret tomb of Queen Nefertiti – hidden in a previously unknown space beyond Tutankhamun’s burial chamber.

If proven true, it could mark one of the biggest archaeological discoveries in the country’s history.

The team, led by former Egyptian minister of antiquities, Mamdouh Eldamaty from Ain Shams University, used ground-penetrating radar and found a secret corridor near the tomb of one of Egypt’s most famous royals, the pharaoh Tutankhamun. The boy king’s remarkable burial site was discovered in 1922 by English archaeologist Howard Carter. (RT)

President Donald Trump has said quarantining New York “will not be necessary”, after the state’s…

With the global sporting calendar currently on pause due to the coronavirus pandemic, former pro…

President: Newly-launched medical institution in Baku to open up additional opportunities in fight against pandemic

State Migration Service: No fines for expiration of temporary stay in Azerbaijan

19:52 Hey MSM, you got coronavirus as another opportunity to roast Trump… but do the polls agree?

17:39 Azerbaijan’s president signs decree to exempt import of some medical supplies from VAT

16:39 Drum roll please! And the BIGGEST WINNER of the deadly global virus is…

16:00 Azerbaijani MPs to sit no less than 2 meters apart at parliament’s session

15:39 Germany looks at tracking patients to rein in coronavirus – reports