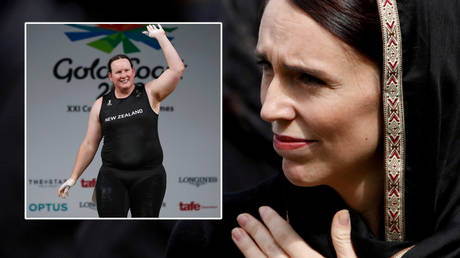 Super-heavyweight Hubbard was confirmed for selection at the rescheduled showpiece last week, earning a mixed response again over concerns that the 43-year-old, who transitioned to female in 2012, will have an advantage at the games.

Ardern pointed out that Hubbard’s involvement had done nothing untoward in allowing her to compete among athletes who were born female, although some experts have questioned whether the guidelines around testosterone levels are sufficient to preserve a level playing field.

Also on rt.com Weightlifter is chosen as first transgender Games star – and Olympic bosses insist they were driven by ‘human rights and fairness’

The country’s sport minister, Grant Robertson, also pledged support for Hubbard, while the conservative opposition leader, Judith Collins, praised the strongwoman for being “who she is and… trying to do her best.”

“I’d hate to see any bullying or any horrible comments about Laurel because she’s doing what she wants to do,” Collins added.

“I’m not here to change the world. I just want to be me and do what I do.”

Australian Charisma Amoe-Tarrant, who will compete against Hubbard, also voiced her support for her rival.

“I have so much respect for her and wish her and the other lifters the best and hope we can all come together and enjoy the Olympics,” said the 22-year-old.

“This Olympics right now is quite different compared to others. I’ve competed with her previously and always had good chats with her. I just wish her well.”

Joanna Harper is a trans runner who helped to advise the IOC on the guidelines. “When I transitioned, within nine months of hormone therapy I was running 12 percent slower,” she told CBS.

“That’s the difference between serious male and serious female athletes. The absolute answer to [whether it’s fair] is still not certain.

“We need a lot more data before we can come to an absolute conclusion on that.”

Influential voices of discontent continue to be raised in the debate, including Save Women’s Sport Australasia, which called the policy “flawed”.

British Olympic silver medalist Sharron Davies reacted by asking: “What’s the point of spending millions trying to catch drug cheats from major competition – trying to gain a tiny but important advantage – if we’re going to give away a 10-34 percent biological advantage?

“A protected female class and an open class in sport including everyone is fair.

Read more:   Pompeo to arrive in Sochi for talks with Lavrov on May 14

“There is strength in numbers but if they’re [supporters of the current guidelines] allowed to name-call us into scared silence, they win by stealth and many young females will lose out on what’s so very rightfully theirs.

“I don’t want other girls losing what’s rightfully theirs because no one speaks up. The IOC has let down a whole generation.

“Those who stay silent are complicit. Now is the time to find your voice for fairness. If you’re not part of the solution, you’re part of the problem.

One thing being missed in the reporting of the Laurel Hubbard story is a glaring anomaly in the current IOC regulations governing the participation of transgender athletes in Olympic event, on which this graph clearly illustrates.The graph shows population distributions… /1 pic.twitter.com/fzmf9krJ0E

“By demanding open, respectful debate, backed up by scientific fact, we can find solutions that the 51 percent of this world who are female deserve.

“I believe the courts are the only place where we will be ‘allowed’ to show all the actual scientific proof that male physical advantage under present IOC rules are not eliminated in the slightest, thus not giving equality in sport – our human right – to females.

“We have men and women’s separate competition for a big reason. Biology in sport matters. Separate categories give females equal opportunities of sporting success.

“The average age of a female Olympic weightlifter is 23. Laurel Hubbard is 43. [She has a] 30 percent unfair advantage. Sex not gender for sport.

What’s the point of spending millions trying to catch drug cheats from major competition trying to gain a tiny but import advantage if we’re going to give away a 10-34% biological advantage ? A protected female class & an open class in sport included every one & is fair

Those who stay silent are complicit, now is the time 2find your voice 4fairness. If you’re not part of the solution you’re part of the problem. By demanding open respectful debate backed up by scientific fact we can find solutions females, 51% of this world deserve #sexnotgender

I believe the courts are the only place where we will be ‘allowed’ to show all the actual scientific proof that male physical advantage under present IOC rules are not eliminated (in the slightest) thus not giving equality in sport, our human right, to females #sexnotgender4sport

“The IOC are to blame for unfair rules. We wrote a letter signed by 60 world class athletes in 2019.

“We met with them in 2020, telling them why the rules were not fit for purpose. It was glaringly obvious this would happen. Why did they carry on regardless?”

European champion hurdler Andy Turner added: “Couldn’t be more against this. I feel sorry for all the women cheated out of a potential medal.”

The Tokyo Olympic Games are due to start on July 23.