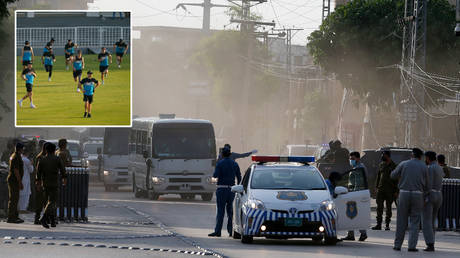 New Zealand’s first cricket tour of Pakistan in 18 years is off after their opening match was cancelled at the 11th hour amid government fears of a potential terrorist attack against the visiting players.

Neither set of players were on hand at Pindi Cricket Stadium for the scheduled coin toss at 9pm local time, with players from New Zealand’s ‘Black Caps’ told to stay in their hotel rooms after the country’s government was reportedly made aware of a credible terrorist threat against their players.

New Zealand Cricket chief executive David White told the media that there was no way the tour could continue after receiving the information he says he was given.

“I understand this will be a blow for the PCB [Pakistan Cricket Board], who have been wonderful hosts, but player safety is paramount and we believe this is the only responsible option,” he said, adding that urgent preparations were underway to safeguard the players’ safety and remove them from Pakistan.

The BLACKCAPS are abandoning their tour of Pakistan following a New Zealand government security alert. Arrangements are now being made for the team’s departure. More information | https://t.co/Lkgg6mAsfu

White’s concerns were matched by New Zealand Cricket’s Players Association chief executive Heath Mills, who said that their players were “safe” but refused to elaborate on the specifics of the threat.

“We’ve been across this process throughout and are fully supportive of the decision,” Mills said. “The players are in good hands; they’re safe – and everyone’s acting in their best interest.”

The development is a crushing blow for Pakistan’s reputation on the international cricket stage. The country did not host a test match within their for ten years after a deadly terrorist attack in 2009 against the Sri Lanka national side.

On that occasion, a bus carrying several members of the visitors’ team was targeted by 12 gunmen who also threw explosives at the vehicle. Six members of the Sri Lanka team were wounded and six members of the Pakistani police and two civilians lost their lives. The attack was blamed on Jihadist militant organization Lashkar-e-Jhangvi.

Security adviser Reg Dickason, who was part of the Black Caps travelling party to Pakistan in 2002 which saw the series suspended after a bomb exploded outside New Zealand’s team hotel, is understood to have spent the past two weeks in Pakistan preparing for their arrival and is said to have given the go-ahead for the Black Caps to travel to the country.

Pakistan cricket bosses, though, say that they left little to chance when it came to welcoming the New Zealand team, vastly heightening security ahead of their arrival.

“We were reasonably aware of it – we were straight off the plane into an armoured van on the tarmac,” New Zealand’s Martin Guptill said of their arrival this week.

“We had a dozen or so police cars behind us and armed soldiers around us at all times, and a lot of cars in the motorcade. We felt as though we were extremely safe.

Extremely disappointed on the abrupt postponement of the series, which could have brought the smiles back for millions of Pakistan Cricket Fans. I’ve full trust in the capabilities and credibility of our security agencies. They are our pride and always will be! Pakistan Zindabad!

Sad and disappointing day for Pakistan cricket … hope it doesn’t have longer effects but it is feared it will have… so much effort has gone into restoring Pakistan’s image.

“There is a little bit of nerves but they’re there to protect us. We’ve got full faith in the security and I felt extremely safe coming over. It’s a different experience but I’m excited to be here and play some cricket.”

However, this initial feeling of security appears to have been overcome by the still vague threat that New Zealand say they received in advance of the opening One Day International – and Pakistan’s cricket authorities seemed to be taken aback by the last minute withdrawal.

“Earlier today, New Zealand Cricket informed us they had been alerted to some security alert and have unilaterally decided to postpone the series,” they said in a statement.

“Pakistan Cricket Board and Pakistan Government made foolproof security arrangements for all visiting teams. We have assured the New Zealand Cricket of the same.

1/2 New Zealand Cricket would not have made the decision to end their tour of Pakistan lightly- they have shown time and again that they are willing to do their part to promote and play our great game so I don’t think it’s right to be critical of them.

2/2 we are all however disappointed for Pakistan cricket, it’s players and supporters. A wonderful cricketing country that has, for a long time, been denied consistent top level cricket. Hopefully the situation in the country improves quickly! 🤞🏽

“The Pakistan Prime Minister spoke personally to the Prime Minister of New Zealand and informed her that we have one of the best intelligence systems in the world and that no security threat of any kind exists for the visiting team.

“The security officials with the New Zealand team have been satisfied with security arrangements made by the Pakistan Government throughout their stay here.

“PCB is willing to continue the scheduled matches. However, cricket lovers in Pakistan and around the world will be disappointed by this last minute withdrawal.”

Pakistan’s Babar Azam also admitted on Twitter that he was perplexed by the last-minute decision by New Zealand to withdraw from the game and immediately leave the country.

“Extremely disappointed on the abrupt postponement of the series, which could have brought the smiles back for millions of Pakistan Cricket fans. I’ve full trust in the capabilities and credibility of our security agencies,” he wrote on Twitter, while local reporter Shahid Hashmi declared it as a “sad and disappointing day for Pakistan cricket”.

Meanwhile, Cricket coach Jason Gillespie added his voice to the mix and said that the New Zealand team shouldn’t be penalized for their pull-out.

“New Zealand Cricket would not have made the decision to end their tour of Pakistan lightly- they have shown time and again that they are willing to do their part to promote and play our great game so I don’t think it’s right to be critical of them,” he wrote on social media.

“We are all however disappointed for Pakistan cricket, its players and supporters. A wonderful cricketing country that has, for a long time, been denied consistent top level cricket. Hopefully the situation in the country improves quickly!”

Since opening their doors to touring teams once again, Pakistan has welcomed Zimbabwe, South Africa, Bangladesh, West Indies and Sri Lanka into their country for games – but a brief visit by England scheduled for next month now appears to be in serious danger as the volatile region struggles to get to grips with outside influences continuing to threaten the sport. (RT)