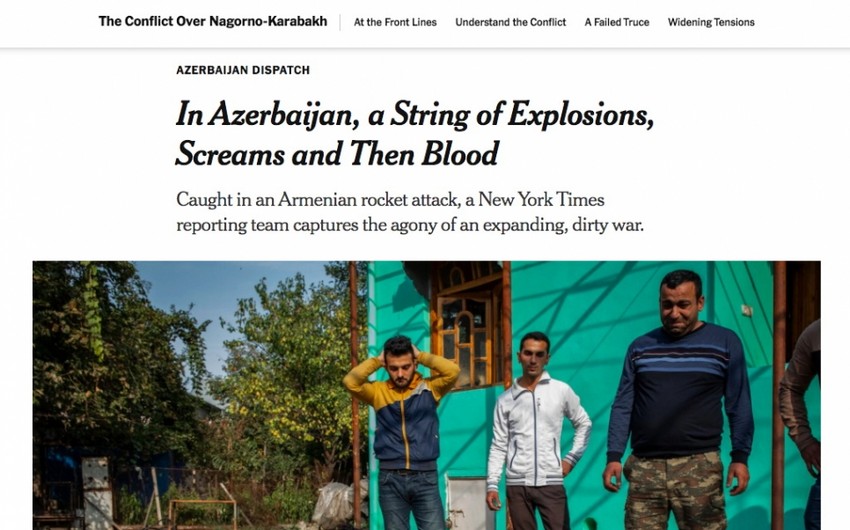 The New York Times published an article about the rocket fire on Azerbaijan by the Armenian armed forces, the Armenian aggression, and the ongoing military operations in Azerbaijan’s occupied territories. A group of journalists of the newspaper, who came under rocket fire from Armenia, described the attack on the civilian population of Azerbaijan, Report informs.

The author of the article, journalist Carlotta Gall, wrote that the first explosion was loud enough to make journalists stop the car when they were driving along the main street of Barda. It seemed close and sounded like a rocket, so they quickly jumped out and crouched down by a wall:

“Azerbaijan is at war with Armenia, but the frontline was 20 miles away, and life to that point was going on uneventfully in the area.” The reporter then showed the horrific consequences of the rocket strike and the transport of wounded civilians to the basement of a nearby private clinic.

The conflict between the two countries began in 1988 over the territory of Nagorno-Karabakh. Armenia had occupied a large part of Azerbaijan’s areas, driving nearly a million Azerbaijanis from their homes. In Azerbaijan, a string of settlements close to the frontline has suffered almost daily missiles hits. The attack on Barda, which lies slightly further from the frontline, appeared to be an escalation.

Gall describes the scene of carnage in the center of Barda as follows: “Wrecked cars stood at awkward angles. Someone had draped blankets over bodies inside two of the cars. A pair of shoes and more blood lay on the ground beside another vehicle. The road was blackened and the air smelled of explosives.”

According to her, in all, 21 people died in downtown Barda in the rocket attack, and 70 people were wounded, the government said in the evening, adding that the rockets were fired from Smerch multiple-rocket system and unleashed cluster bomblets. Designed to be used against armies in open spaces, cluster bombs are banned worldwide because of their danger to civilians in residential areas.