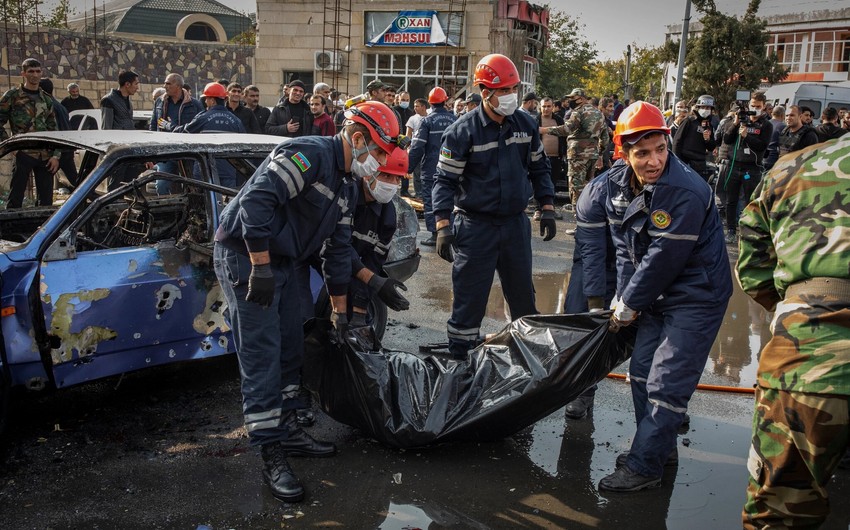 New York Times journalists have prepared a report from the Azerbaijani city of Barda, subjected to rocket attacks from Armenia.
Report informs, journalist Carlotta Gall, along with photographer Ivor Prickett, also came under fire from the Armenian side while driving along the city’s main street.

“At the time of the blast on Wednesday, we were driving along the main street of the provincial town of Barda, Azerbaijan, toward an intersection. Azerbaijan is at war with Armenia, but the frontline was 20 miles away, and life to that point was going on uneventfully in the area. “
In her material, Carlotta Gall says that before the start of the rocket attack, the city lived an ordinary life. Women were out shopping; men were filling their cars at the gas station.

Then, a string of loud explosions sounded in rapid succession, each one seeming closer and louder. A woman started shrieking. A man bellowed at his family.

Across the road, blood-smeared the steps into the basement of a private health clinic. Inside, a taxi driver, bleeding heavily from the leg, was being treated. Nurses, patients, and passers-by huddled in the basement, stepping around the blood, calling their families on their cellphones.
Doctors and nurses are rushing to a taxi driver who had been injured in the rocket attack.

“You see what the Armenians are doing to us,” Kamil Kerimov, 55, shouted. “Do you see someone from the military here? Why are they doing this? You see only civilians.” He added: “They want to create chaos.”

Yagubiya Hamidova, 44, a cardiologist taking shelter in the clinic’s basement, had moved recently from the frontline town of Terter, thinking it would be safer here. “Please help us,” she said. “No one in the world knows what is happening to us.”

Read more:   Unusual dried fruits that you will meet in Azerbaijan

New York Times photographer Ivor Prickett captured the grief of those who were hit and lost loved ones.

Fuad Ismayilov’s sister kissed his hand shortly after he was killed in a rocket attack launched by Armenian forces on the city of Barda in Azerbaijan on Wednesday.

Ivanka Trump questioned for lawsuit over use of 2017 inauguration funds

Ivanka Trump, the president’s daughter and adviser, has been questioned under oath as part of…