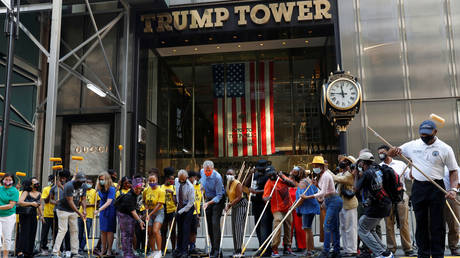 Signaling where his priorities lie amid an epidemic of coronavirus and violence, New York City Mayor Bill de Blasio ordered a stretch of 5th Avenue outside Trump Tower to be painted with the words ‘Black Lives Matter’.

City workers closed off the street on Thursday morning and began painting the mural, as De Blasio boasted about “liberating 5th Avenue” and finally giving credit to African-Americans for building New York and the US.

“We are not denigrating anything, we are liberating Fifth Avenue.”New York City Mayor Bill de Blasio delivers remarks as a #BlackLivesMatter mural is painted in front of Trump Tower pic.twitter.com/MlwwLgmuQQ

The Democrat mayor originally announced – a day after protesters demanded his resignation, in early June – that he would have a mural on a street in every one of New York City’s five boroughs, with the Manhattan one somewhere near City Hall, in recognition of the “fundamental power of Black Lives Matter.”

That later morphed into making a political statement against President Donald Trump, whom the mayor’s spokeswoman Julia Arredondo declared “a disgrace to the values we cherish” in the city. Rather than decorating a street near the City Hall, the mural would be painted on 5th Avenue, right outside Trump Tower. It was supposed to be finished before the July 4 holiday, but even ‘woke’ public works apparently only move at the speed of the government. (RT)