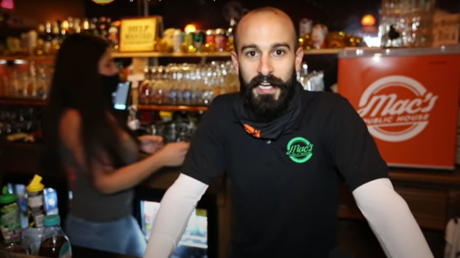 A New York City tavern owner who declared his business an autonomous zone, in defiance of city and state Covid-19 orders, has been arrested after undercover police went into the pub to prove he was serving customers indoors.

Danny Presti was handcuffed by sheriff’s deputies and taken into custody on Tuesday night for violating bans on indoor food and beverage services. Dozens of supporters stood on the sidewalk outside, yelling at deputies, during and after the arrest.

When Presti returned to his shuttered Staten Island business, Mac’s Public House, on Wednesday morning, deputies reportedly lined the building outside to ensure that no one other than Presti and co-owner Keith McAlarney could get in.

The large law enforcement response came after Presti and McAlarney late last month declared Mac’s an “autonomous zone,” borrowing from a tactic used earlier this year by anarchist protesters to set apart neighborhoods in Seattle and Portland as separate countries.

Also on rt.com ‘This is Canada, not North Korea!’ WATCH Toronto BBQ owner get dragged away in handcuffs for breaching Covid-19 rules

The move came after the pub was hit with $1,000-a-day fines and stripped of its state liquor license for staying open in defiance of pandemic restrictions. The owners then subverted a state business-shutdown order by saying they would serve visitors for free, while asking for donations to cover their bills.

Presti and McAlarney also urged other business owners to know their legal rights and stand up to “overreaching” Covid-19 orders issued by Mayor Andrew Cuomo and Mayor Bill de Blasio. “Open your places up,”Presti said. “Take your cities, your states and your country back.”

Presti started a GoFundMe account on Sunday to raise money for Mac’s fight with city and state governments. Nearly $34,000 of the $500,000 target had been raised as of Wednesday afternoon. (RT)