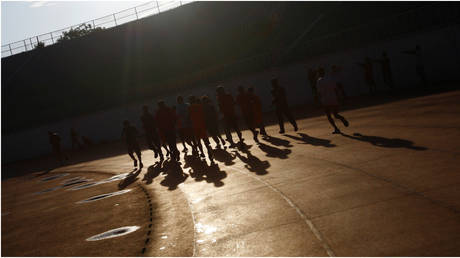 A group of LGBT athletes in training. © Reuters

A row over transgender athletes has intensified after education chiefs threatened funding cuts and backed a challenge from female-born competitors in a ruling labeled by campaigners as “yet another Trump administration attack.”

The state of Connecticut could be forced to stop allowing transgender girls to compete as girls in high school sports after a warning from the US Education Department, issued as part of a 45-page letter in response to a case filed last year by several cisgender female track athletes, that their federal funding could be affected should the policy remain in place.

Officials decided that the policy is a violation of the federal civil rights law that guarantees equal education opportunities for women, including in athletics, and concluded that transgender competitors had physical advantages which were denying female student-athletes a wide range of benefits, opportunities and accolades.

Chelsea Mitchell, a senior who was among the plaintiffs against transgender runners Terry Miller and Andraya Yearwood, said she was relieved to hear that her “lost” championships would “mean something.”

“It feels like we are finally headed in the right direction and that we will be able to get justice for the countless girls along with myself who have faced discrimination for years,” she told AP.

“It is liberating to know that my voice, my story, my loss has been heard.”

The American Civil Liberties Union has defended Miller and Yearwood, who have won 15 races since 2017, by arguing that both are taking hormone treatments that put them on an equal footing with their opponents.

It is contending that preventing transgender girls from competing in such races is a violation of the US Constitution on grounds of discrimination and invading privacy.

“All that today’s finding represents is yet another attack from the Trump administration on transgender students,” said Chase Strangio, who leads transgender justice initiatives for the union’s LGBT and HIV Project.

“Trans students belong in our schools, including on sports teams, and we aren’t backing down from this fight.”

Roger Brooks, an attorney for the plaintiffs on behalf of the Alliance Defending Freedom, claimed the ruling was a milestone in the debate over whether “males on the playing field or on the track are depriving girls of opportunities.”

“Around the nation, districts are going to want to be reading this,” he warned. “It does have legal implications.”

The Connecticut Interscholastic Athletic Conference said that students who identified as female were recognized as such “for all purposes” under clear state laws.

Also on rt.com Margaret Court should be celebrated as a tennis great, not shamefully sidelined because of her transgender and gay marriage views

“To do otherwise would not only be discriminatory but would deprive high school students of the meaningful opportunity to participate in educational activities, including inter-scholastic sports, based on sex-stereotyping and prejudice,” it responded.

Brooks said he hoped the decision would be taken into account during the lawsuit, which seeks to block Miller and Yearwood from participating in now-postponed track meetings and expunge any records they had set.

Read more:   Under Trump's administration people of wishing to obtain US citizenship doubled

Connecticut is thought to be one of 18 states, including capital Washington DC, to allow transgender high school athletes to compete without restrictions.

Idaho, which is one of the states with laws containing restrictions, recently became the first to ban transgender women from competing in women’s sports.

Legal rulings around transgender athletes have long been a point of considerable contention in the US, where the Justice Department issued a statement in March saying that the conference “has decided to force biological girls to compete against biological boys who publicly identify with the female gender and want to compete on sex-specific athletic teams.”

The National Center for Transgender Equality, which calls the Trump government “the discrimination administration,” added the ruling to the top of a timeline that it said demonstrated “a nonstop onslaught against the rights of LGBTQ people.” (RT)

“Baku-Tbilisi-Kars railway was commissioned in 2017. I think, this was a historic event. It is…

Solidarity and cooperation are important among international organizations amidst pandemic”, President Ilham Aliyev said during…

According to the rotation plan, a group of servicemen of the Azerbaijan Army returned from…

572 new cases of coronavirus infection have been recorded in Azerbaijan, while 364 patients have…