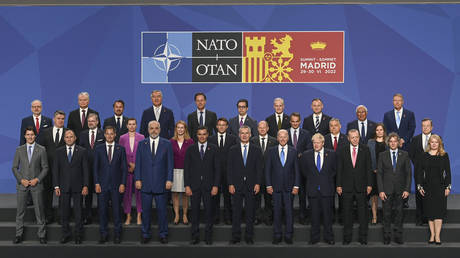 On day two of its annual summit, the alliance formally focused its strategy against Russia NATO leaders gather for a group photo at the NATO summit in Madrid, Spain, June 29, 2022 © AP / Kenny Holston

NATO’s annual summit continued in Madrid on Wednesday, with the leaders of the US-led military alliance agreeing to take on two new members and naming Russia the number one threat to the bloc.

China also found a spot on the agenda, as did Ukrainian President Volodymyr Zelensky, who again petitioned Western leaders for billions of dollars out of their taxpayers’ pockets.

A New Strategy NATO leaders agreed on Wednesday to adopt a new Strategic Concept. This document serves as a policy blueprint that outlines the alliance’s stance toward non-members, partners and adversaries. It had last been updated in 2010.

As expected, the new version names Russia as the “most significant and direct threat” to the military bloc, and accuses Moscow of a “pattern … of aggressive actions” against the wider transatlantic community.

The document does not promise Ukraine eventual membership but states that NATO will continue to “develop our partnerships” with both Ukraine and Georgia. While since the end of the Cold War Moscow has considered NATO’s expansion into former Soviet territory an unacceptable security risk, the latest Strategic Concept insists that “NATO does not seek confrontation and poses no threat to the Russian Federation.”

#NATO leaders have just agreed our new Strategic Concept, the blueprint for our Alliance in a more competitive world. #NATOSummit#Madridhttps://t.co/asolkHK5I8

NATO was founded in 1949 to oppose the perceived threat posed by the Soviet Union. In its first ever Strategic Concept, adopted the following year, the alliance gave itself the right to defend the entire north Atlantic region “by all means possible with all types of weapons, without exception.”

New membersAfter several weeks of diplomatic wrangling, the alliance said in a statement that it had formally invited Sweden and Finland to become members. NATO Secretary General Jens Stoltenberg described the swift accession of the Nordic nations as “unprecedented.” 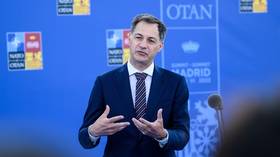 Finland and Sweden, the latter of which has been neutral since the 19th century, applied to join the bloc in mid-May, just several months after Russia launched its military operation in Ukraine.

However, the accession process was initially blocked by Turkey, which wanted both countries to end their support for organizations deemed terrorist groups by the government of President Recep Tayyip Erdogan, and to lift an arms embargo against Ankara. After a deal was agreed on Tuesday, Erdogan declared that “Turkey got what it wanted,” and Finland and Sweden became observer states at the Madrid summit.

NATO’s support for Ukraine comes with a hefty price tag, Ukrainian President Volodymyr Zelensky told the alliance’s leaders. In a video address on Wednesday, Zelensky demanded that the West give him “urgent aid sufficient for victory,” or deal with “a delayed war between Russia and you.”