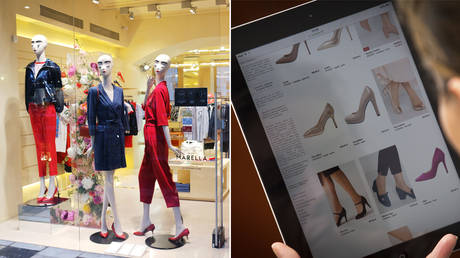 Russia’s “new economy” is booming, but no one seems to have noticed. The only European country with real domestic alternatives to the leading US tech giants has seen a surge in innovation, accelerated by the Covid-19 pandemic.

Everyone is suffering from the impact of the coronavirus. The World Bank is predicting a 5.2 percent contraction in global GDP in 2020 – the worst recession in decades – and Russia’s GDP is projected to shrink by some 4.4 percent. But that is not affecting the country’s innovation economy, where online sales are growing in double digits and, if anything, have only accelerated because of the crisis.

Of course, part of the reason online transactions are doing well is because everyone was locked up at home for several months from March, but the strict lockdowns have only accelerated the growth of online business in Russia that was already well established before Covid-19 appeared.

Also on rt.com Russia to open WORLD’S LARGEST gold mine in Siberia

The three leading players on the IT commerce front – Ozon, Wildberries, and the London listed Yandex, better known as “the Google of Russia” – have already been putting in 70-80 percent annual revenue growth for several years now, and the present situation will only make them expand faster.

But not by that much. They were already growing very fast before the lockdowns forced many Russians to shop online for the first time. Russian e-commerce took off about five years ago and has been growing at 25-30 percent ever since. By the end of this year, the turnover of e-commerce orders is expected to top RUB2.5 trillion ($32.8 billion), or 9 percent of total retail transactions. However, that is up by a third from the RUB1.7 trillion ($22.3 billion) at the end of last year.

The virus has added to the trend but only around RUB300 billion ($4 billion) to sales – or an extra 12 percent on top of traditional retail purchases, according to Sova Capital, a Russian investment bank.

Data shows that the coronavirus crisis has had no viable impact on the projections for online sales this year, and there is no let-up in the pace of growth either, which is expected to almost treble, to a total of RUB7.1 trillion ($93.1 billion) in just four years’ time, when online sales will account for a whopping 20 percent of the total nationwide. Additional transactions due to coronavirus are expected to make up RUB1.6 trillion of these purchases, or about 20 percent of the total.

“The step up from 10 percent of retail being done online to 20 percent in just four years is an enormous change,” says Oksana Mustiatsa, an e-commerce analyst with Sova Capital. “And it means there will be a consolidation in the sector that will end with two or three very large players.”

The explosion of online sales is already having an impact in the real world. Tatyana Bakalchuk, who launched Wildberries with her husband in 2004, became Russia’s second-ever female billionaire in February, after the valuation of her company topped $1.2bn. Last summer, it overtook Sportmaster, a traditional bricks-and-mortar purveyor of sports gear and accessories, to become Russia’s biggest clothing store – the first time an online business had become the out and out market leader in any product area.

Since then, Wildberries has been expanding throughout the Commonwealth of Independent States (CIS), opening businesses in Russia’s nearest neighbors and slowly working its way west, after it set up shop in EU member states Poland and Slovakia earlier this year.

Likewise, the growth in the volume of foot traffic in Moscow’s leading shopping malls has been stagnant for several years already, even before the coronavirus saw it collapse in May as punters switched from visiting retail outlets to click-and-order shopping on their phones.

Still, despite all this rapid progress, Russia still lags behind many comparable countries when it comes to the embrace of e-commerce, although it has started to close the gap. “2019 e-commerce sales, as a share of retail sales in Russia, reached just 6 percent versus 8 percent in Poland, 15 percent in the US, and 28 percent in China,” said Mustiatsa during a recent webinar dedicated to Russia’s online business. “Multi-category players accounted for less than 20 percent of the e-commerce market in Russia in 2019, versus 50 percent in the US and over 70 percent in China.”

Russia’s new economy seems to have reached a critical mass and is starting to change rapidly. The country already has more people online than the entire population of Germany, broadband penetration is widespread, and smartphone sales continue to run in double digits. Russia became a serious e-market a decade ago, when Yandex IPOd in London in 2011 with an $11 billion valuation, which made, and indeed still makes, Yandex the most valuable tech company in all of Europe.

But this has never been clear to the West. After former spy Aleksandr Litvinenko was killed using the radioactive isotope of polonium in November 2006, Guardian columnist Will Hutton wrote a column that led with: “Moscow can never create a Google, an Apple, a BBC, a Siemens: for that, it would need the rule of law and all the open democratic structures that support it.”

Not only had Russia already created its own Google, but Yandex is now out-googling Google, as the US-based search engine has struggled to take market share off the dominant Russian incumbent, which continues to out-innovate its US rival.

Equity investors are well aware of the size and potential of Yandex, and increasingly aware of the boom on the Russian tech market. While the leading Russian RTS index is down by 26 percent in the year to date as of October 23, Yandex’s shares are up 31.6 percent in the year to date from January, as if the oil crisis and coronavirus epidemic never happened. Moreover, when Yandex IPOd, its stock was priced at $25 per share. Today, that stock is priced at $48.7 per share, making it one of the handful of Russian stocks that are worth more now than they were before the 2008 global financial market crash. Nearly every other name on the equity market is still underwater compared to their pre-2008 prices.

Now Russia is moving into a new phase. Ozon also just announced it will IPO in New York around the end of this year and is expected to fetch a seven-digit valuation. It will use the money to continue to build up its business. Russia’s leading bank, Sberbank, has just dropped the word “bank” from its name entirely and has been on an acquisition spending spree, snapping up tech company after tech company as it seeks to transform itself from the crusty old Soviet savings bank into a multi-functional lifestyle portal that caters to its clients’ needs – and Sber already has approximately half the Russian population as customers.

First the vaccines, now the bill. As G20 leaders call for a fair distribution of…

Nagorno-Karabakh is an integral part of Azerbaijan, says Putin

Erdogan called on European Union to keep its promises

We have always considered ourselves part of Europe, and if we had not been forced…

Agreement prepared by me, Aliyev and Pashinyan, says Putin

Turkish servicemen will be in Karabakh in any case, says Ibrahim Kalin