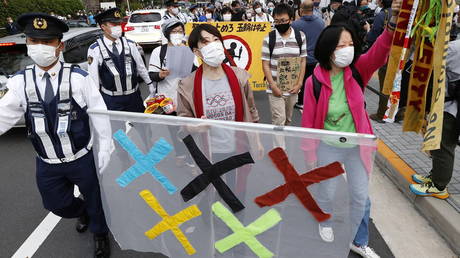 Members of the public have protested against the Olympics in Japan. © Reuters

A new poll published on Monday has shown that over 80% of the Japanese public are against hosting the postponed Tokyo 2020 summer Olympics, with just 10 weeks until the widely-criticized games are meant to go ahead.

The latest findings come after the east Asian country expanded its state of emergency on Friday afternoon, as it deals with a fourth wave of coronavirus infections.

Putting pressure on the nation’s healthcare system, which cares for an aging population, medical professionals have repeatedly warned that there are shortages and staff are burning out.

This time conducted by The Asahi Shimbun, the fresh poll discovered that 43% of participants want the Olympics canceled and 40% seek another postponement until the situation has improved in their homeland.

Worryingly for organizers, these figures are an increase from the 35% who supported a cancelation when the same paper conducted the survey in April, with 34% wanting a further delay.

A mere 14% showed a preference to hold the competition in the summer as is scheduled, but this is down from 28%.

Shimbun gathered the thoughts of 1,527 Japanese people who replied to their calls with a further 3,191 responding by telephone.

Also on rt.com Over 70 percent of Japanese people want Tokyo Olympics to be postponed or CANCELLED – survey

If the Games in fact do go ahead, a majority 59% don’t want to see any spectators in the capital’s National Stadium and other venues, with 33% backing small crowds and just three percent regular capacity.

Elsewhere at Kyodo News, their own survey published on Sunday showed 59.7% backing cancellation, although postponement was not provided as an option.

In the highest numbers found anywhere across the new surveys, 87.7% worried that an influx of foreign athletes and staff members from overseas may spread the coronavirus.

Read more:   Azerbaijan Army does not fire at civilians - MOD

Though Japan has experienced a much smaller death rate than other big countries with under 11,500 fatalities thus far in the pandemic, the government is under pressure given a slow roll out of the vaccine.

In early April, a Kyodo report that athletes would be vaccinated before many members of the general populous caused a social media storm and chief cabinet secretary Katsunobu Kato had to debunk the claims reportedly made by an official.

Even so, Kyodo’s poll found that 85% of respondents consider the rollout slow, and 71.5% expressed unhappiness with the government’s handling of the pandemic.

Still yet to respond to the latest dismay after protests took place the week before last, organizers are adamant the games will go ahead with or without approval from the Japanese public.

Read more:   First Vice Speaker: "We are the children of the third republic" - INTERVIEW - Part 1

Defiantly, the president of the delayed edition of the athletics spectacle, Seiko Hashimoto, has said: “There are a variety of concerns but, as the Tokyo 2020 organizing committee, we are not thinking about canceling the games.”

Also on rt.com Sterile, fun-free Tokyo Olympic Games are starting to look distinctly unlike ‘a victory over Covid’ (RT)