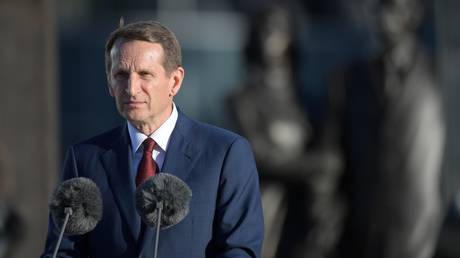 Sergey Naryshkin, who heads Russia’s Foreign Intelligence Service (SVR), said he is willing to have a face-to-face with his counterpart from the CIA, Director William Burns. The two previously held a meeting in Ankara in mid-November.

The top Russian spy said on Tuesday that a new engagement with Burns was “possible” provided that the parties agree to it, the news agency TASS reported.

Türkiye’s National Intelligence Organization hosted the previous meeting on November 14 last year, which reportedly lasted for about two and a half hours. The senior officials discussed nuclear threats arising from the Ukraine conflict and ways to mitigate them, according to the American side. Then, Burns reportedly traveled to Kiev to meet Ukrainian President Vladimir Zelensky.

“The Americans themselves told us ten times that this channel of communication was absolutely confidential and should not be disclosed … so that it would not be tainted by some propagandistic spin,” he told journalists.

“We agreed. But as soon as they landed in Ankara, [the news] got immediately leaked. I don’t know where from, whether it was the White House or the Department of State,” he added.

In his interview with TASS on Tuesday, Naryshkin discussed the Ukraine crisis, and Russia’s cooperation with China and Iran. (RT)