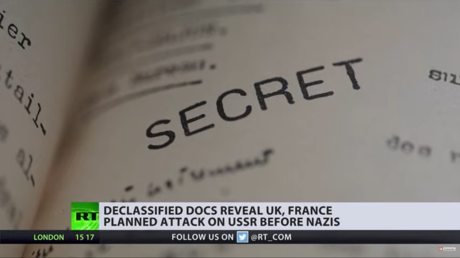 The Russian national archive this week is hosting a new exhibition about the Soviet Union’s actions on the global stage between September 1939, when World War II began in earnest, and June 1941, when Nazi Germany and its allies – including Italy, Finland, Romania, Slovakia and Hungary – invaded the USSR.

RT was given a preview of the artefacts on display, some of which have never been shown to the general public before. Among them are French documents detailing plans to launch an aerial bombing campaign against the USSR, which were developed together with its British allies shortly before the German invasion of France in May 1940.

Read more:   Azerbaijani FM meets with his colleague from the UAE

Maurice Gamelin, the French commander-in-chief at the time, eyed using French troops in Syria to attack oilfields in what is now Azerbaijan, as well as its capital Baku. Azeri oil was the most important source of fuel for the USSR and, by extension, Germany, if it could get its hands on the territory. Moscow and Berlin at the time had a non-aggression pact, even as Hitler was preparing to stab Stalin in the back. An act which didn’t surprise shrewd thinkers in Moscow.

The suggested French airstrikes would have been launched in conjunction with other activities aimed at undermining the USSR, like inciting its Muslim population to rebel against Moscow. Germany’s blitzkrieg in France threw a spanner in those plans.

Also on rt.com For all the talk of ‘Stalin’s successes,’ the Soviet Union smashed the Nazis in spite of his harsh leadership, not because of it

The short-lived Stalin-Hitler deal came into being only after Moscow’s attempts to sign a mutual defense agreement with Paris and London was rejected by the West Europeans. The same powers gave Berlin the green light to annex Czechoslovakia in 1938 and stood by as Germany invaded Poland, the following year. The eight-month period following Britain’s declaration of hostilities is known as the Phoney War.

The reluctance of the Western European heavyweights to join forces with the Soviets against Germany was not surprising. This was long before Hitler’s name became synonymous with unspeakable evil and fascist ideology had many sympathisers in the West, including among its elites.