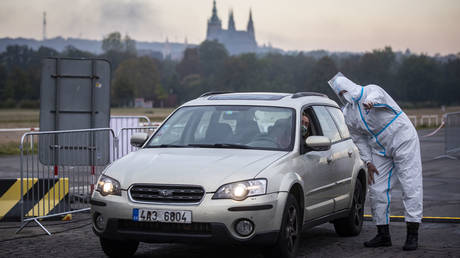 The Czech government has ordered most shops to close, in a bid to prevent the country’s health system from collapsing in November under the pressure of Covid-19.

The new restrictions, in place from 6am on October 22 until November 3, will force all retail outlets to shut, apart from essential services such as supermarkets and pharmacies.

Group sizes outdoors will also be limited to two people, with the exception of households or colleagues.

On Tuesday the Ministry of Health reported a record 11,984 new cases of the virus, the country’s highest daily total since the pandemic began.

Also on rt.com Protest against Covid-19 rules in Prague escalates into clashes with police (VIDEOS)

Infections have skyrocketed in recent weeks, and it was only on October 9 that more than 8,000 cases were registered in a single day for the first time.

Official data released on Wednesday also showed that the number of people to have died from the virus in the last 24 hours reached 1,619, up from 1,513 the previous day, in the country of 10.7 million.

On Wednesday, Czech Prime Minister Andrej Babis apologized for the effect of the measures on people’s lives, but issued a stark warning that the health system was nearing breaking point. (RT)