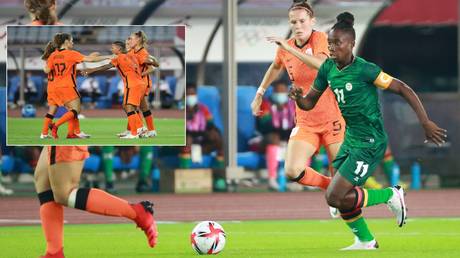 Banda starred for Zambia despite her team's heavy defeat to the Netherlands. © AFP / Reuters

Anyone betting the under in the goal glut between the Netherlands and Zambia will have been disappointed as the Dutch set a new Olympics record in a 10-3 demolition – but fans have hailed Barbra Banda for her refusal to give in.

The Netherlands, who are among the pre-tournament favorites to claim gold in the women’s football event at the Tokyo Olympics, underscored their glowing reputation with a storming attacking performance in which they plundered an incredible TEN goals against their Zambian counterparts – but coach Sarina Wiegman will know that she will have to tighten things up at the back after being repeatedly torn apart by Zambian sensation Banda.

The Dutch found themselves three goals to the good after just 15 minutes before Banda claimed the first of her three goals to hint that Zambian resistance was incoming.

However, any such aspirations were short-lived as the Netherlands managed a further three goals before half-time.

Netherlands set a new record for most goals in an Olympic match 😅👏 pic.twitter.com/EmZB70ICPJ

Netherlands 10-3 ZambiaMiedema may have netted 4, but Babra Banda (21) will make the headlines. She’s just scored a Hat-trick in Zambia’s first ever match at an Olympics ❤️🇿🇲 pic.twitter.com/yduyfmJHmB

The second half began as the first ended with the Dutch managing a further four goals by the 80th minute before the 21-year-old Banda, who plays with Shanghai Shengli in China, scored two goals in two minutes to complete her own hat-trick to add a shred of respectability to the scoreline.

The win carves out a little bit of history for the Netherlands as they become the highest scorers in a single game in Olympic history, but the all-time women’s record still remains the USA’s 13-goal haul against Thailand in the Women’s World Cup in 2019

But despite the lopsided margin of victory, it says something of Banda’s impact on the game, where she shone on both the right and left flanks, that her hat-trick has been hailed as the most impressive single contribution to the game – despite Vivianne Miedema bagging FOUR goals for the Netherlands.

To be honest in my opinion, without offending anyone or being condescending, and without triggering anyone, i just wanna say WTF is this ?

Doesn’t really capture the Olympic spirit when both tweeting it and using a crying laughing emoji. Well done but not a very classy tweet/good way to word it at least. These kind of mismatches happen and continue to create records going forth, spotlighting them is unnecessary.

It remains to be seen if Banda’s contribution to the game will lead to the scouts of some of Europe’s elite clubs pricking up their ears after her star-making performance in Tokyo on Wednesday.

“To be honest in my opinion, without offending anyone or being condescending, and without triggering anyone, I just wanna say WTF is this?” said one incredulous fan in response to the SEVEN-GOAL margin of victory, while another called out ESPN for using a ‘crying laughing’ emoji while reporting on the scoreline.

“Doesn’t really capture the Olympic spirit when both tweeting it and using a crying laughing emoji,” they wrote online.

“Well done but not a very classy tweet/good way to word it at least. These kind of mismatches happen and continue to create records going forth, spotlighting them is unnecessary.”

Also on rt.com ‘They could have won with humility’: US women’s team criticized after 13-0 Thailand World Cup rout (RT)

The next orienteering competitions among the servicemen of the Azerbaijan Army are conducted, MoD told…