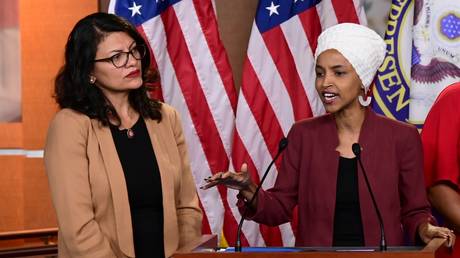 Any person supporting the BDS movement may be barred from entering Israel. It will be up to Prime Minister Benjamin Netanyahu to decide whether this law would apply to US representatives Ilhan Omar and Rashida Tlaib.

The boycott, divestment and sanctions movement (BDS) seeks to punish Israel economically for its continued occupation of Palestinian land, similar to how South Africa was targeted during the times of apartheid. Israel itself seeks to oppose the movement globally, calling it biased and anti-Semitic in nature.

Any person supporting BDS may be turned back when trying to enter Israel, but a waiver is possible for political and diplomatic figures. The country’s leader, Benjamin Netanyahu, will personally decide whether to issue such exceptions to two US Congresswomen, Ilhan Omar and Rashida Tlaib, when they try to travel to Israel, according to Haaretz.

Omar and Tlaib, the only two Muslim women in the US Congress, have been opposing attempts to ban participating in BDS action in the US. Omar this week introduced a bill, which would affirm the right of US citizens to boycott foreign nations. It has been co-sponsored by Tlaib. Both vocally opposed a bill co-sponsored by over 300 fellow representatives across the aisle, which would declare Congress opposition to BDS. (RT)