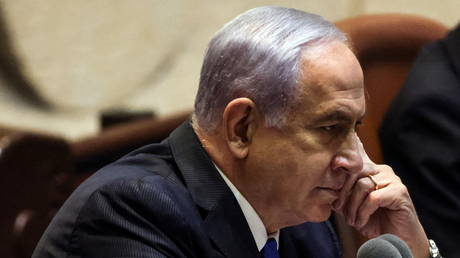 Israeli Prime Minister Benjamin Netanyahu during a special session of the Knesset to approve and swear-in a new coalition government. © Reuters / Ronen Zvulun

Benjamin Netanyahu will be leaving the Israeli prime minister’s post after 12 years in power as the country’s legislature voted to swear in a new ‘change’ government on Sunday.

The landmark vote took place after a tense session in the Knesset, which saw one of the coalition leaders, Naftali Bennett, constantly heckled by Netanyahu supporters during his speech. Bennett’s key ally, Yair Lapid, decided to forgo his speech completely due to the behavior of opponents, some of whom had to be removed from the chamber by security.

When Netanyahu spoke, he claimed that Israel will be getting a “weak government” with the ‘change’ coalition. He insisted that Bennett, who is going to become the next PM, “doesn’t have the global standing” and “credibility” to counter the Jewish state’s archrival, Iran, adding that Tehran would be celebrating after the vote.

The country’s longest-serving prime minister also accused Bennett of perpetrating the “greatest fraud in Israel’s history,” recalling that the Yamina alliance leader had categorically ruled out a partnership with Lapid ahead of the election. But now, in accordance with the agreement involving eight anti-Netanyahu parties, Lapid will choose a successor to Bennett as PM in 2023. (RT)