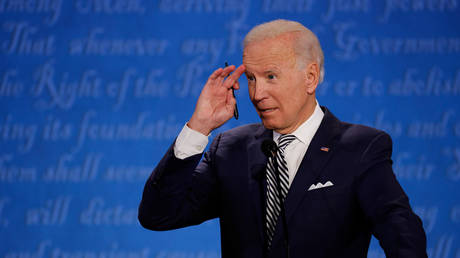 NBC News had its reporters debunk a damaging document about the Bidens that few have heard of, yet it won’t investigate emails potentially implicating Joe Biden in foreign deals. Conservatives smelled a distraction campaign.

An “intelligence” document purportedly linking Biden and his son Hunter to the Chinese Communist Party was the work of a computer-generated fake researcher, NBC News reported on Thursday. According to the news outlet, the report’s author, ‘Martin Aspen,’ is a fabricated identity and his photograph is a ‘deepfake’ composite generated by artificial intelligence.

The document, published by blogger and professor Christopher Balding at the beginning of October, claims that Hunter Biden made deals in China beyond those laid out in a recent New York Post expose. Hunter, according to the document, courted Chinese state money, and Chinese officials and businessmen were eager to hand over cash for the chance to court his father, who was then the vice president of the United States.

According to NBC, the document “went viral on the right-wing internet” and “laid the groundwork” for the right to “baselessly accuse candidate Joe Biden of being beholden to the Chinese government.”

The only problem with that assertion is that few on the right have ever heard of this document, and it was never the basis of the ongoing Hunter Biden scandal in the first place.

I’v never heard of this document, have any of you? Weird how they can chase down an obscure conspiracy document but they can’t actually do a story about the real scandal, what’s on the Biden laptop and the witness Tony Bobulinski who the FBI interviewed as a witness. https://t.co/D04capD9xv

No one saw this fake dossier. https://t.co/PQ8Bzi8TDO

A lot of people are confusing this obscure document for the actual real situation going on.

Instead, the right has been focused on a tranche of Hunter Biden’s emails and texts released by the New York Post in mid-October. Allegedly sourced from Hunter’s own laptop by Trump’s lawyer, Rudy Giuliani, the messages show Hunter attempting to trade access to his father with Ukranian energy tycoons and trying to set up business ventures in China to benefit his family, all while planning to kick a share of his foreign profits up to “the big guy” – which a former business partner of Hunter, Tony Bobulinski, has attested is the former vice president.

According to NBC, the Aspen document is “part of a wider effort to smear Hunter Biden and weaken Joe Biden’s presidential campaign.” To paraphrase its report, if the document was faked, the entire Biden scandal is brought into disrepute.

Except the New York Post’s reporting is vouched for by Bobulinski and others who appeared to confirm the authenticity of the emails and texts, including pollster Frank Luntz, who didn’t deny that he had taken part in one of the email conversations. While it is unclear if any of the deals laid out in Hunter’s messages ever materialized, the Biden campaign has not denied their authenticity, or accused Bobulinski of lying.

The media hasn’t pressed Biden on the emails, however. NBC did not report on Bobulinski’s claims, except to describe them as an effort to wrap Biden up in a “Pizzagate”-style conspiracy. The Washington Post first suggested the laptop leaks were a “Russian intelligence operation,” then told readers in a prominent op-ed to “treat the Hunter Biden leaks as if they were a foreign intelligence operation – even if they probably aren’t.”

The New York Times also tried to tie the laptop to Russia, and only changed its tack when the Director of National Intelligence last week said there was “no concrete evidence” of Russian involvement, a statement seconded by the FBI shortly afterwards. NPR went one further, flat out refusing to “waste the listeners’ and readers’ time” on the story, which the publicly-funded network called “pure distraction.”

Some conservatives speculated that with the “Russian disinformation” explanation failing, NBC was trying to deliberately conflate Aspen’s dodgy report with the New York Post’s leaks, in an effort to discredit the latter and protect Biden. (RT)