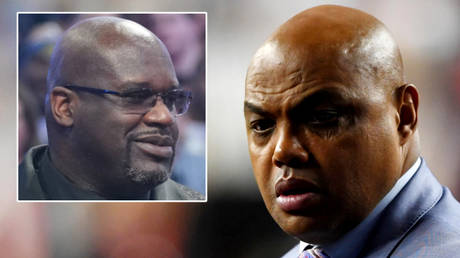 NBA greats Charles Barkley and Shaquille O’Neal have endured predictable criticism after arguing that the shooting of Breonna Taylor had been ‘lumped in’ with the killing of George Floyd, offering an apparent defense of police.

Stars including Los Angeles Lakers talisman LeBron James and tennis world number one Naomi Osaka have joined a chorus of public outrage this week after the verdict in the case, which centered around a botched drugs raid that resulted in Taylor being shot in her home in Louisville in March.

While many had called for the police officers involved to face heavy potential punishments, the only charges that were raised in the announcement on Wednesday were brought against an officer for endangerment after they opened fire in a home next to Taylor’s apartment.

Eleven-time NBA All-Star Barkley said that the killings were incomparable to the shooting of Ahmaud Arbery in February, the killing of George Floyd in May and other instances of unarmed African Americans being targeted by police.

Charles Barkley says defunding police is a ridiculous idea. “Who are black people supposed to call? The Ghostbusters?” pic.twitter.com/LlJQfLzxUq

“The no-knock warrant is something we need to get rid of…across the board,” he told broadcasters ahead of the showdown between James’s Lakers and the Denver Nuggets in the Western Conference Finals.

Read more:   'We are the 48%': tens of thousands march in London for Europe

“But I am worried to lump all these situations in together. I just feel bad that the young lady lost her life. But we do have to take into account that her boyfriend shot at the cops and shot a cop.

“So like I say, even though I am really sorry she lost her life, I just don’t think we can put this in the same situation as George Floyd or Ahmaud Arbery.”

Barkley also claimed that the idea of defunding police would hurt black people in the US the most, adding that they would have to “call Ghostbusters” in times of trouble should the move happen, as well as adding that “rich white people” would “always have cops”.

Taylor’s boyfriend, Kenneth Walker, fired at the police during the incident because he believed they were intruders. They retaliated by firing more than 20 shots, hitting Taylor with five in a killing that led to the city paying Taylor’s family $12 million and agreeing to reform police practices.

i know Charles Barkley did NOT just say on national television — “i’m sad Breonna Taylor lost her life, but we can’t forget her boyfriend did fire at a cop first.” please tell me i heard that wrong incorrectly …

I didn’t know I could be this disgusted by Charles Barkley.

It’s black men like Charles Barkley and Shaquille O’Neil who continues to support the injustice against black folks perpetrated by cops…. How can you justify what happened to Breonna Taylor and just dismiss the cops … Not surprised tho 🤷🏽♀️

“I didn’t know I could be this disgusted by Charles Barkley,” said Adam Parkhomenko, a Democratic strategist with more than 527,000 followers on Twitter.

Read more:   Too much sleep linked to a greater risk of disease and death, study finds

Presenter and broadcaster Ashley Nicole reacted in disbelief. “I know Charles Barkley did not just say [that] on national television,” she retorted.

Barkley did have a backer in fellow basketball icon Shaquille O’Neal. “I have to agree with Charles,” he said. “This one is sort of lumped in.

It’s true. They were unarmed and murdered. Taylor’s case is just as tragic, but it is not due to a person that can be jailed. In her case it was the system, the bad warrant, the protocol. The cop was doing his job, was in danger and returned fire. Very different than the others

Charles Barkley said we can’t put Breonna Taylor’s case in same breath as George Floyd and Ahmaud Arbery because we have to account for Breonna’s boyfriend shooting at the officer. pic.twitter.com/H4osAVKlKD

“When you have a warrant signed by the judge, you are doing your job, and I would imagine that you would fire back.”

O’Neal’s thoughts were met with more derision. “It’s black men like Charles Barkley and Shaquille O’Neil who continue to support the injustice against black folks perpetrated by cops,” said one viewer.

“How can you justify what happened to Breonna Taylor and just dismiss the cops? Not surprised, though.”

James offered a typically unequivocal view on the public scandal following the Lakers’ win, lamenting the loss of a “beautiful woman” while expressing hope for “better days and to spread love and not hate.”

“We want justice, no matter how long it takes,” he insisted. “We’re here playing this game and it is very hard and very difficult, but at the same time, our hearts are with that family. And it is just so unjust, what’s going on.” (RT)

Chairman of the U.S. Educated Azerbaijani Alumni Association Nail Akhundzade sent an appeal to US…