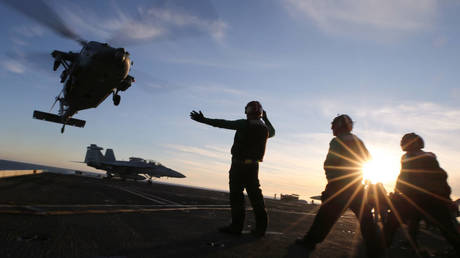 FILE PHOTO: A US Navy helicopter is shown taking off from the flight deck of the USS Nimitz as the aircraft carrier conducts training operations in January 2020. © Getty Images / Mario Tama

A whistleblower has alleged that crew members of the USS Nimitz were led to drink contaminated water and denied medical help FILE PHOTO: A US Navy helicopter is shown taking off from the flight deck of the USS Nimitz as the aircraft carrier conducts training operations in January 2020. © Getty Images / Mario Tama

A US Navy whistleblower has reportedly accused his superiors on the USS Nimitz aircraft carrier of lying to crew members about the severity of a fuel leak into their drinking water and denying them medical treatment when they were sickened by the contaminated fluid.

“We were exposed to an unhealthy amount of JP-5,” a sailor on the carrier told Business Insider, referring to a common type of kerosene-based jet fuel. The media outlet, which posted its article on Saturday, said it didn’t identify the sailor out of concern that he might face retribution from the Navy for speaking out.

The incident occurred in mid-September, when members of the nearly 3,000-person crew noticed discoloration and a foul smell in the water that they use for drinking and showering. After initially advising the crew to drink only bottled water, the ship’s commanding officer and executive officer later announced that the Nimitz’s normal water supply was safe to use. 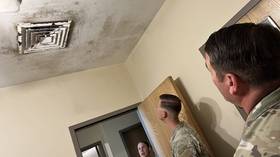 “People believed the CO and the XO, and people were showering in this stuff,” the whistleblower said. The next day, the officers reversed course again, saying the water was unsafe. However, crew members who sought medical attention after suffering such symptoms as nausea and skin rashes were allegedly turned away.

“Medical was telling us that it will pass through,” the sailor said. He added that when the ship’s water tanks were opened for inspection on September 17, two days after the discoloration and bad odor were first noticed, there was a “thick layer of JP-5 on top of the potable water.”

For at least the following ten days, sailors were told to test the water’s taste and smell, the whistleblower said. A photo provided by the sailor showed a glass container of water with a thick green layer on the top and a murky white layer on the bottom, according to Business Insider. 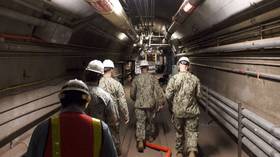 “The health and well-being of our sailors is our top priority,” Navy spokesman Commander Sean Robertson told the media outlet. He acknowledged that ten crew members had reported health issues that “could be associated with JP-5 ingestion.”

The Navy has said that its tests detected only “traces” of jet fuel in the water. The USS Nimitz has been docked in San Diego since September 17, rather than going back out to sea last week as scheduled. The same carrier was forced back to the docks last November because of a “deficiency” in its nuclear propulsion plant.

Read more:   'UN to launch a new project on employment of people with disabilities in Azerbaijan'

Four families near Hawaii’s Pearl Harbor sued the Navy in August for leaks of jet fuel into their water supply. The plaintiffs said the Navy initially denied their concerns, even as the fuel tainted the water supply used by about 93,000 people, then refused them proper medical care. (RT)