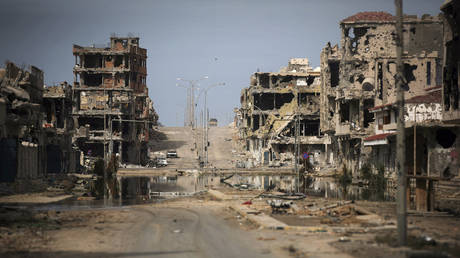 Irish MEP Clare Daly accused NATO of bringing “terror, death, lawlessness [and] rape” to Libya, and claimed that the US-led alliance’s strategy in Ukraine will yield similar results. Daly made her declaration after voting against a resolution calling for greater EU involvement in Libya.

Daly, along with fellow Irish leftist Mick Wallace, voted last week against a resolution that called on the EU to play “a more active role” in rebuilding war-torn Libya, including by setting up police and military units under the command of the UN-recognized Government of National Accord (GNA).

While the EU as a whole supports the GNA, the rival Libyan National Army (LNA) has the backing of France and has reportedly hired private military contractors from Russia to bolster its forces. Amid this ongoing power struggle, Daly sees NATO’s 2011 bombing campaign as the root of Libya’s problems.

“I voted against this report,” she declared, in a video posted to her Twitter page on Wednesday. “Its timing is pretty appropriate coming, as it does, a few short weeks after the 11th anniversary of the day Libyan leader Muammar Gaddafi was killed during the NATO assault on Libya: sodomized with a bayonet and shot in the head.”

After 11th anniversary of #Gaddafi‘s death during #NATO‘s assault on #Libya – all in the name of freedom, democracy & human rights – we’d do well to remember what happened next: terror, death, lawlessness, rape, poverty, starvation. Libya riven by conflict. That’s NATO’s legacy. pic.twitter.com/7CUgdSvcmJ

Read more:   Azerbaijan to appeal to Russia as a protest against film shooting in Nagorno-Karabakh

Gadaffi was deposed and tortured by NATO-backed militants in October 2011, with his mutilated corpse left on display in a meat market in the city of Misrata. Once an oil-rich and prosperous nation, Libya descended into anarchy following his murder, with an Amnesty International report earlier this year describing conditions there as “hellish.”

“Libya is a country riven by conflict, its economy shattered, its population – formerly the wealthiest in Africa – ridden and mired in poverty,” she continued. “Migrants are bought and sold in slave markets. It’s a country of mass graves, of crimes against humanity. This is NATO’s legacy.” (RT)