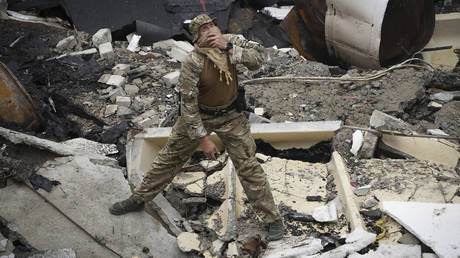 The head of the alliance, Jens Stoltenberg, says peace negotiations will ultimately bring an end to the conflict A Ukrainian serviceman examining a destroyed building. © AP / Andrii Marienko

The conflict between Russia and Ukraine will probably end with a negotiated settlement, but that does not mean the West should stop sending arms to Kiev or reduce sanctions pressure on Moscow, NATO Secretary General Jens Stoltenberg said on Saturday.

“Most likely, this war will end at the negotiating table,” Stoltenberg told the Spanish newspaper El Pais, acknowledging that an outright military victory was not on the cards.

“Our responsibility is to ensure that Ukraine is in the strongest possible position and to help it remain a sovereign and independent European nation,” he said.

The best way to bolster Kiev’s position ahead of talks with Moscow is “to provide strong military support, economic support, and push through tough sanctions against Russia,” the NATO chief added.

However, he declined to say when negotiations between Russia and Ukraine could take place.
(RT)