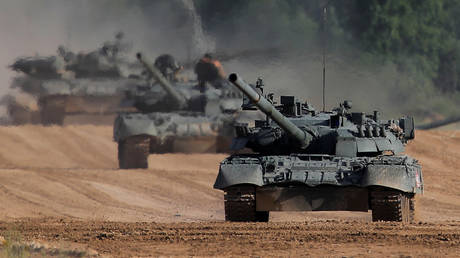 A pair of German pundits, including a retired top NATO officer, tried their best to warn the world about nuclear-weapons-wielding Russia, but it was in fact the West that did everything to threaten Moscow, experts told RT.

There’s no shortage of expert pieces these days that sound the alarm over Russia’s “assertive” policies, with the bulk of the fearmongering expertise coming from other side of the Atlantic. This time though, two Germans, Joachim Krause, the head of the Institute for Security Policy, and retired three-star general Heinrich Brauss, took over the lead.

According to a bizarre Die Welt op-ed they contributed to, Moscow under Putin “is preparing – totally unprovoked – for regional wars in Europe, which they want to end with the help of nuclear weapons threats.” And those “war preparations” are happening at a time “when our political attention is shrouded in climate change, the migration crisis, the EU crisis and many other issues.”

If a war breaks out, Moscow could try a “surprise attack… which would be underpinned by nuclear threats before NATO can effectively respond,” the pair asserted. Echoing some Pentagon hawks, they singled out Baltic states and Poland as the first victims of the Russian offensive.

The arguments by reputed pundits might look plausible, but experts interviewed by RT believe that the opposite is true. “NATO did what they could do… to pose a military threat to the Russian Federation,” said Willy Wimmer, former vice-president of the OSCE’s Parliamentary Assembly.

Likewise, the EU is militarizing itself as it pursues “an old Anglo-Saxon idea” of isolating Russia from the rest of Europe.

Like many other Russia-bashing articles, Die Welt’s publication wouldn’t be complete without claiming that Moscow “purposefully interferes with our democracies.” It also complained that NATO can’t do anything to tackle it. “Everything that Russia is doing is not recognized in Western circles,” commented Peter Schulze, professor at the reputed University of Goettingen.

They may be all smiles for the cameras, but the issues Angela Merkel and Recep…

11:13 Diary of a delegate: Undiscovered Azerbaijan