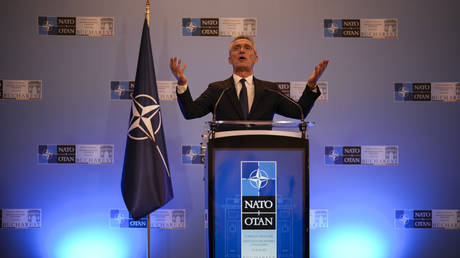 The head of the US-led military bloc could still offer no timeline for when Kiev might attain membership NATO Secretary General Jens Stoltenberg gestures during a press conference in Bucharest, Romania, November 29, 2022. © AP / Vadim Ghirda

The North Atlantic Treaty Organization has reiterated its 2008 pledge to admit Ukraine and Georgia – both neighbors to Russia – into the Western alliance, insisting NATO will continue to expand its presence across Eastern Europe in response to Moscow’s ongoing military offensive.

Following meetings in the Romanian capital of Bucharest on Tuesday, NATO foreign ministers issued a statement reaffirming the 14-year old promise to someday grant membership to Kiev and Tbilisi – first made at an alliance summit in the very same city back in 2008.

Joined by counterparts from the two NATO aspirants, as well as Bosnia and Herzegovina and Moldova, the FMs said they “firmly stand behind our commitment to the alliance’s Open Door Policy” and “reaffirm the decisions we took at the 2008 Bucharest Summit and all subsequent decisions with respect to Georgia and Ukraine.” 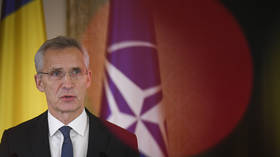 The officials went on to condemn Russia’s military action in Ukraine as “the gravest threat to Euro-Atlantic security in decades” and vowed to continue aiding Kiev “for as long as necessary.”

The statement also announced that NATO will create a “new baseline for our deterrence and defense posture by significantly strengthening it and further developing the full range of robust, combat-ready forces and capabilities” in Europe.

In remarks at the opening of Tuesday’s summit, NATO Secretary General Jens Stoltenberg outlined how the alliance would bolster its military presence, saying it had “doubled the number of NATO battlegroups from four to eight” and is now working on ways to quickly scale up those units and deploy “pre-positioned equipment.”

While Stoltenberg stressed that NATO is “not a party to the conflict in Ukraine,” he said the bloc is providing “unprecedented support” to Kiev to ensure it “prevails as an independent sovereign state.” He noted that Western assistance long predates the start of Russia’s offensive in February, pointing out that NATO forces have trained “tens of thousands of troops” since 2014, helping to make Ukraine’s military “much bigger, much better equipped and much better led.”

The NATO chief also declared that the alliance’s “door is open” to new members, citing the most recent admissions of Montenegro and North Macedonia, as well as recent applications by Finland and Sweden. However, when pressed on when Ukraine might be finally granted membership, Stoltenberg suggested the issue would not be settled for some time.

“The main focus now is on supporting Ukraine, ensuring that [Russian President Vladimir Putin] doesn’t win but that Ukraine prevails,” he said, providing no details on the progress of Kiev’s formal membership application filed in September.

Despite NATO’s professed ‘Open Door Policy,’ the alliance requires aspiring members to meet certain criteria before joining, including upholding a democratic political system and market-based economy, fair treatment of minority groups, civilian control of the military and some level of compatibility with existing NATO forces, among other things. Whether Ukraine has met those requirements remains unclear, as Western officials have been reluctant to discuss any exact timeframe for when NATO will make good on its 2008 pledge. (RT)