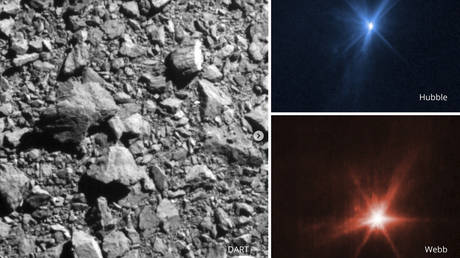 This combination of images provided by NASA shows three different views of the DART spacecraft impact on the asteroid Dimorphos on September 26, 2022 ©  NASA via AP

The images were captured simultaneously by two massive space telescopes This combination of images provided by NASA shows three different views of the DART spacecraft impact on the asteroid Dimorphos on September 26, 2022 © NASA via AP

America’s space agency has released a series of photos showing the aftermath of a “planetary defense” experiment which aimed to knock an incoming asteroid off course, with giant plumes of material seen flying off the object after a deliberate collision with a spacecraft.

NASA issued the images on Thursday, revealing early results of the Double Asteroid Redirection Test (DART) conducted earlier this week, what the space agency deemed the “world’s first test of the kinetic impact mitigation technique, using a spacecraft to deflect an asteroid.” The photos were taken by the Hubble Space Telescope and the newer James Webb Space Telescope, also marking the first time the two observatories captured the same celestial body simultaneously.

“When I saw the data, I was literally speechless, stunned by the amazing detail of the ejecta that Hubble captured,” said Jian-Yang Li of the Planetary Science Institute in Tucson, Arizona, who led the Hubble team’s observations, referring to the plumes of material thrown from the asteroid Dimorphos. “I feel lucky to witness this moment and be part of the team that made this happen.”

Check out Hubble’s “after” shots from #DARTMission impact!Earlier this week, @NASA intentionally crashed a spacecraft into Dimorphos, a non-threatening asteroid moonlet in the double-asteroid system of Didymos, in a test of planetary defense: https://t.co/pe2qeFDYoSpic.twitter.com/VQ5X1pQlEy

Dimorphos can be seen to grow increasingly brighter in images captured 22 minutes, 5 hours and 8.2 hours after DART’s impact, with huge clouds thrown from its surface appearing to glow a pale blue in visible light.

Speed, I am speed.Observing the #DARTMission impact with Webb was a unique challenge. The target moved over at a speed over 3 times faster than the original speed limit Webb was designed to track! In the weeks leading up to the impact, teams carefully tested for success. pic.twitter.com/XGpTsMg0Ab

Another timelapse series from the James Webb telescope shows the asteroid just before the collision, as well as several hours post-impact. An “area of rapid, extreme brightening” can be observed after DART hit its target, NASA said.

Here is one from Hawaii https://t.co/ULbGTF4fM8

The space agency will continue to look in on Dimorphos and its companion asteroid Didymos to determine the effects of the DART experiment, with researchers set to monitor the binary asteroid system 10 more times over the next three weeks. NASA also plans to observe the asteroids using the Webb telescope’s Mid-Infrared Instrument (MIRI) and Near-Infrared Spectrograph (NIRSpec) to help understand the objects’ chemical composition.

What historic China-Arab summits mean for the Middle East