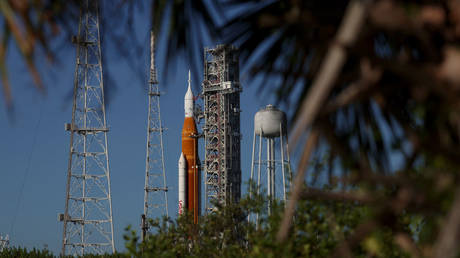 With a tropical storm tracking toward Florida, the US space agency has postponed its Artemis 1 mission for the third time FILE PHOTO: NASA’s Artemis 1 rocket is shown sitting on a launch pad at Cape Canaveral, Florida, before the mission was postponed earlier this month. © Getty Images / Joe Raedle

NASA has delayed the launch of its Artemis 1 moon rocket for the third time, postponing the mission because of an approaching tropical storm that is forecast to strengthen into a major hurricane before making landfall in Florida next week.

Officials at the Kennedy Space Center near Cape Canaveral, Florida, announced the decision on Saturday, saying they were preparing to roll back the $4.1 billion Space Launch System (SLS) rocket while monitoring reports on Tropical Storm Ian. “To protect our employees and the integrated stack, we will begin configuring the vehicle to roll back,” said Jim Free, NASA’s associate administrator for exploration systems development.

The mission could be rescheduled for liftoff as soon as October 2 if the 330-foot-tall rocket can be left on the launch pad during the stormy weather, but NASA would need to fall back to a later window of opportunity if the SLS has to be hauled back to the Vehicle Assembly Building. Artemis 1 mission managers are expected to make a decision on Sunday, after considering updated forecasts for the wind speeds that Ian will bring to Florida’s eastern coast.

Artemis I update: @NASA is foregoing a launch opportunity Tuesday, Sept. 27, and preparing for rollback, while continuing to watch the weather forecast associated with Tropical Storm Ian.Learn more: https://t.co/A7M6KfWynNpic.twitter.com/Ul12GiPEte

Tropical-storm-force winds could reach central Florida as soon as Tuesday night, by which time Ian is forecast to be moving through the eastern Gulf of Mexico as a major hurricane. The storm is expected to weaken, though retain hurricane status, before slamming into Florida’s western coast on Wednesday or Thursday, depending on how far north it tracks before making landfall, according to the National Hurricane Center in Miami. 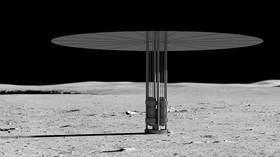 Although the launch site is on the opposite coast, high winds will likely be felt throughout the narrow peninsula. The rocket stack can reportedly remain at the launch pad and withstand winds up to 85 miles per hour. The massive SLS is touted as the most powerful rocket ever made, producing up to 8.8 million pounds of thrust, according to NASA.

Two other attempts at launching the unmanned Artemis 1 mission were canceled in August and earlier this month because of hydrogen leaks. Plans call for the SLS to propel the Orion space capsule into lunar orbit. Once the system is proven, including the Orion’s high-speed re-entry into the Earth’s atmosphere, NASA aims to launch a manned mission to orbit the moon in 2024 and the following year to achieve its first crewed moon landing since 1972.

If NASA is forced to roll the rocket back to the Vehicle Assembly Building, the next window of opportunity with potentially favorable conditions for launch will run from October 17 through October 31.