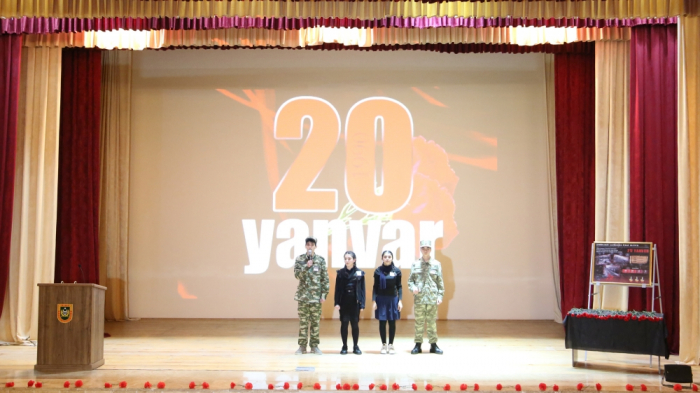 At the events organized in the formations and military units, training-educational center located in the Nakhchivan Autonomous Republic, the blessed memory of shehids (martyrs) was honored and the national anthem was performed, according to Azerbaijan’s Ministry of Defense.

During the speeches, it was noted that on January 20, 1990, sons of the Motherland, who sacrificed their lives for freedom, wrote a new page in the heroic chronicle of the Azerbaijani people. A full political and legal assessment of the bloody 20 January tragedy at the state level is associated with the name of national leader Heydar Aliyev. Today, the souls of the great leader Heydar Aliyev and the shehids (martyrs), who sacrificed their lives for the independence and territorial integrity of Azerbaijan, rest in peace. Because, under the command of President of the Republic of Azerbaijan, Victorious Supreme Commander-in-Chief Ilham Aliyev, glorious Azerbaijan Army, which put an end to the 30-year longing occupation, and liberated the lands from Armenian occupation and created a new reality in the region. The victory of the Azerbaijan Army, which won the 44-day war, emphasizes not only respect of spirit of the Azerbaijani shehids (martyrs), but also guarantees that the country’s people will not be tested by tragedies and genocides. Today, President of the Republic of Azerbaijan, Victorious Supreme Commander-in-Chief Ilham Aliyev and Chairman of the Supreme Assembly of the Nakhchivan Autonomous Republic Vasif Talibov play an important role in the patriotic education of the youth and in the field of improvement of social and living conditions of military personnel, war veterans and families of shehids (martyrs).

Poems on a patriotic theme were read by cadets of military Lyceum named after Heydar Aliyev and schoolchildren of Nakhchivan Garrison Secondary School in the events performed by artistic amateur teams of military units with literary and artistic composition.

At the end of the event, videos about the 20 January tragedy were demonstrated.

Total lunar eclipse on May 16

Ammunition explodes in Aghdam killing one